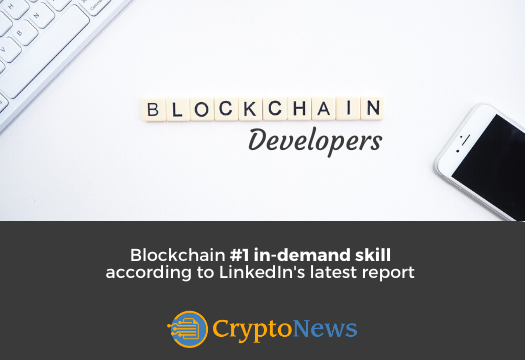 We’ve had our ups and downs in the cryptocurrency marketplaces over the last couple of years, but a few elements of our ecosystem have remained a constant. One of these is the demand for blockchain developers and their skills, which has seen a regular increase year after year.

According to the latest LinkedIn recruitment research report, blockchain is the number one in-demand skill in 2020. Even though they simply say “blockchain,” the term used by itself is vague. However, because this is a report that relates to jobs and recruitment, we can safely assume that they are talking about skills related to blockchain development.

The report carries on to explain that a lot of companies see blockchain as a transformative technology. That it has gone beyond the use case of cryptocurrencies to become a solution bearing implementation for all variety of businesses. They go onward to encourage recruiters to familiarize themselves with how blockchain works, what the benefits are, and who are the people that can help their company implement blockchain.

Shared digital ledgers have indeed become a significant force in the business world. From the TradeLens implementation to China embracing blockchain on a national level, the technology seems to attract all kinds of businesses to use it. And for great reasons too.

Blockchain technology can help businesses automate a lot of operations that involve third parties, partnerships, and communication between other entities. Also benefits can be seen internally for big companies, such as better communication between top management and operations, and vice versa, better management of stock and supplies, ensuring quality standards are met in production and more.

Blockchain technology requires a significant amount of creativity to be implemented in a productive way, which is another skill on the most in-demand skills report by LinkedIn.

Around the world, corporations such as IBM, Oracle, Microsoft, Amazon, JPMorgan Chase, American Express, and others. It’s used for supply chains, shipping, healthcare, entertainment, and gaming.

All in all, we are looking down the barrel at a great year for blockchain developers, with an increase in the number of opportunities available for them, and potential deficits as companies are competing for their employment.