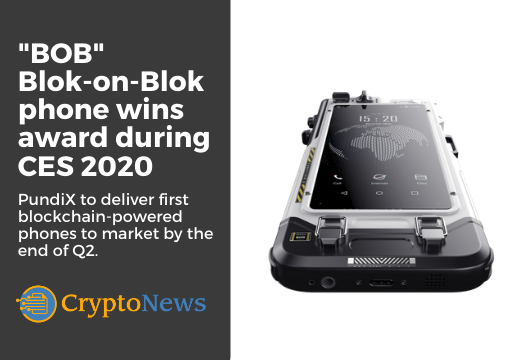 Two years since it was first seen on the floor of the XBlockchain Bali 2018 conference, the new version of the “BOB” i.e. Blok on Blok phone created by PundiX was unveiled and presented during CES 2020 ultimately winning an innovation reward by the conference organizers.

PundiX, a company well-recognized in the cryptocurrency ecosystem broke through with their 2018 ICO token sale, where they managed to gather $35 million USD. They’ve created various solutions for merchants and crypto users, and now they are showing us their work on this blockchain phone.

Currently in pre-sale through Indiegogo, with expectations to deliver the first phones to backers mid-2020. Regarding the pre-order price, it seems that BOB will be more affordable compared to Sirin Lab’s Finney, and in addition, it will actually host an OS designed for blockchain.

According to the company “With BOB, no one can block, monitor or spy on your calls, messages or data.” Other sources indicate that the company’s CEO personally tested these features by making a successful VOIP (voice over IP) call while being in Dubai, a country where VOIP calls are disabled. (not shown in the video)

What are BOB’s expected features?

Powered by PundiX’s blockchain protocol, Function X, the BOB phone will enable users to connect to the FX ecosystem, which is 100% blockchain-based. From there you can use the blockchain to call, text, or browse without a centralized service provider, while at the same time safeguarding and claiming ownership over your personal data.

The phone will feature unique dual-mode operations, where you can switch between Android or FunctionX ecosystems on demand.

The phone will also be modular, but we are not sure if there will be a pre-assembled option at the time of purchase. According to the Indiegogo campaign, “Every BOB order will come in a MOD Assembly Kit containing the core components like: The motherboard, display screen, camera, audio speaker parts, buttons and aesthetic accessory enhancements to personalize the look and feel.”

In addition, the company says that the kit comes along with a detailed instruction guide, is designed to be easily assembled, and even says that people will be able to 3D print additional parts to further customize the phone.

PundiX is determined to make its blockchain-based OS the norm for mobile devices, hoping to eventually have major manufacturers use the OS on their devices as well, furthering the reach of blockchain technology and improving the privacy of user’s lives.

Regardless of how it may turn out, the ambition of the company is real and they’ve shown time and time again that they can back up their arguments with real, actionable work.