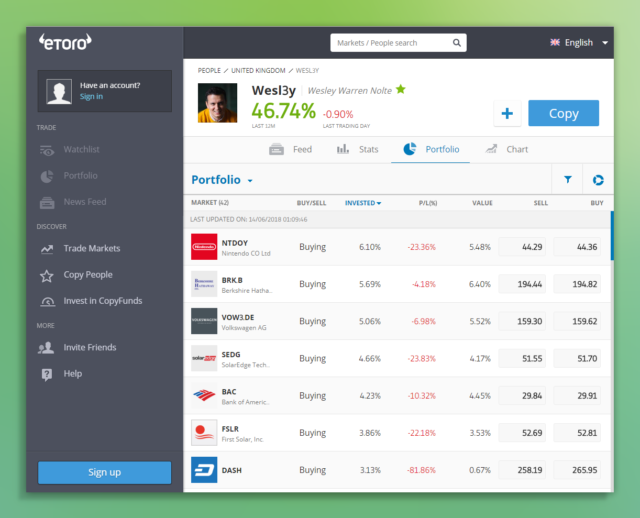 Wes Nolte, a 30-something South African-born chief technology officer based in London, describes his trading style as “diverse, risk-balanced, and bodacious”. It’s an approach that appears to work, given that he is one of the most-copied Popular Investors (PIs) on the pioneering global investment and trading platform eToro.

“I have a relatively low-risk trading strategy that diversifies across stocks – especially United States tech stocks – commodities, currencies and cryptos,” he says.

He is particularly fond of cryptos. “There is a good change they will flatten the hierarchies that our society and culture, and so on, are built upon,” continues Nolte, whose eToro handle is Wesl3y. “They are by their nature networks of peers, and could easily change our capitalist society, significantly shifting power from the few to the many.”

Nolte joined eToro in March 2015 and became a PI – a programme that allows top traders to build their own financial business and earn a 2 per cent management fee – less than two years later, in January 2017.

He signed up to the platform having amassed knowledge from 17 years of trading. He had even bought and mined cryptos since 2013, but eToro offered him something extra.

“I was attracted to the platform for a number of reasons: I was curious about how a social network built around trading might work; because of the ease and speed of trading; the great user interface; the fact that it’s secure; plus the knowledge I can draw from and give to the community,” Nolte says. “Also I was interested in the PI programme, and how it enables top traders to earn a second income.

“On eToro I learnt about importance of diversifying. There are many types of traders on the platform – for example forex traders, commodity traders, equity traders – and at times when my portofolio did less well I was able to learn from them and further strengthen my strategy.”

Nolte reveals that he became a PI “completely by accident”. He explains: “I’d been using the platform for over a year, and had no intention of becoming a PI – mostly because I misunderstood how it worked. I was just having fun tweaking my approach and making insane returns – more than 200 per cent – when suddenly dozens of people starting following me every hour, using the CopyTrader tool. 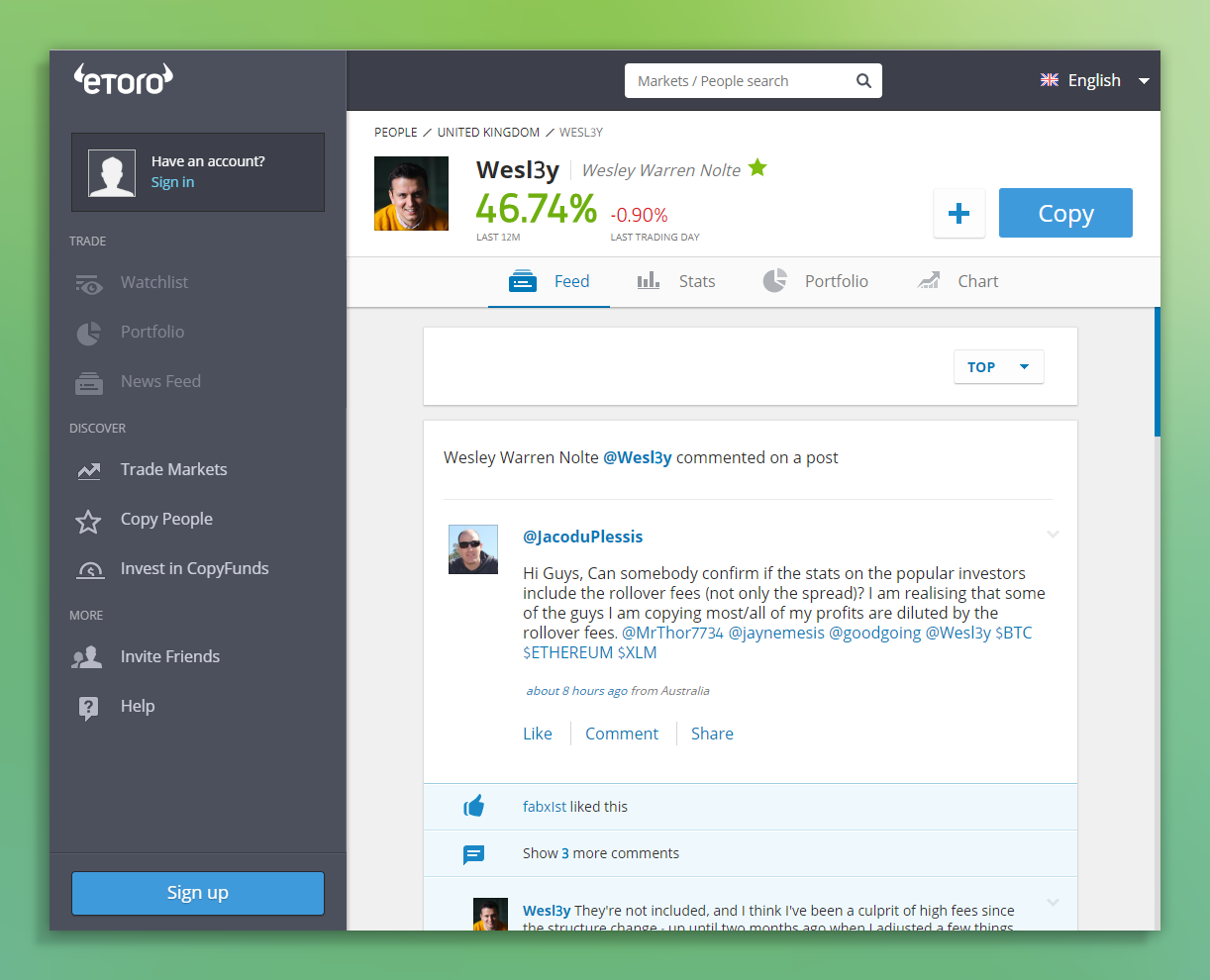 “My eToro account manager called me up and asked if I’d like to join the PI programme. He explained that eToro would give me a nice bonus for joining – I’d thought I needed to pay for the privilege. Who the hell would turn that down? My main account has made a profit of nearly $20,000 from $13,000 since I became a PI.”

There are other benefits to being a PI, suggests Nolte. “I have a strong voice in the eToro community,” he says, “but I also learn a lot as people share ideas and news directly with me. I’ve also managed to generate over $3m in profit for my copiers which makes me very happy. My long-term goal is to generate $1m in profit for myself, and an average for $10m for my copiers every year.”

What makes a successful PI on eToro? Good communication with copiers is crucial, says Nolte – who rises at 6am to research the markets and posts news digests and trading updates throughout the day on eToro – as is perseverance. “I’ve got grit, and am a voracious reader,” he says. “I’ve also learnt to be patient and park emotions – most of the time. Grit enables me to stick it out in tough times, especially as I have 70,000 followers and when things aren’t going well they’ll let me know.

“I love economics and studies of human behaviour, and read a lot every day, so I’m able to build a pretty good picture of the market on an hourly, daily, weekly, monthly, and yearly basis.”

Offering a final nugget of advice for eToro newcomers with aspirations to yield great returns – and rise to PI level – Nolte adds: “Be patient; trading is the hardest skill to learn. You must learn to love the red, because it presents an opportunity.

“If you become a PI, stick with it. Sometimes it feels as though you’re posting messages into a void but this is how everyone starts off. Have fun, make money and the rest will come. Finally, don’t take things too seriously. No one gets out of life alive.”

Benefits Of Trading On eToro

Buying cryptocurrencies is not appropriate for everybody. Cryptocurrencies are not regulated. They are not backed by governments or central banks. Cryptocurrencies are backed by technology and trust. You will not benefit from the protections available to clients receiving regulated investment services, such as access to the Investor Compensation Fund for clients of Cypriot Investment Firms, or the Cypriot Financial Ombudsman Services Compensation Scheme. UK clients will not benefit from protections available from the Financial Services Compensation Scheme (FSCS) and the Financial Ombudsman Service (FOS) for dispute resolution. You are at risk of losing all of your invested capital. This is not investment advice, past performance is no guarantee of future results.

Your capital is at risk.