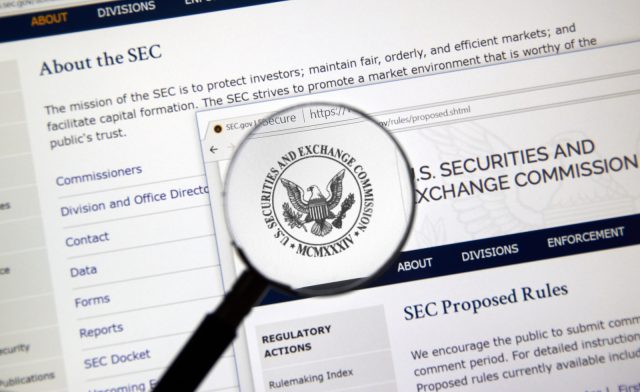 The U.S. Securities and Exchange Commission (SEC) has moved to clarify its stance on both ICOs and the cryptocurrency market in general. Many in the cryptocurrency community view an SEC crackdown on activities within the sector as being something of an inevitability. However, judging by the Commission’s recent public statement, there may actually be little to fear.

The SEC states its mission as being to protect investors, maintain fair, orderly, and efficient markets, and to facilitate capital formation. The SEC oversees the key participants in the world of securities, which includes securities exchanges, brokers and dealers, in addition to investment advisors and mutual funds. The SEC is most concerned with the promotion and disclosure of important market-related information, alongside maintaining fair dealing, and providing fraud protection. And each year, the agency brings hundreds of civil enforcement actions against both individuals and corporations that violate securities laws.

The SEC has once again turned its attention to the world of cryptocurrencies and has released a statement aimed at what it calls “Main Street Investors” and “Market Professionals.” The general message was quite positive as Chairman Jay Clayton stated: “I believe that initial coin offerings – whether they represent offerings of securities or not – can be effective ways for entrepreneurs and others to raise funding, including for innovative projects.”

He went on to add that “Any such activity that involves an offering of securities must be accompanied by the important disclosures, processes and other investor protections that our securities laws require. A change in the structure of a securities offering does not change the fundamental point that when a security is being offered, our securities laws must be followed.”

As far as the Commission is concerned, while there are cryptocurrencies that do not act as securities, there are others that do and any tokens incorporating features that allow for potential profits based on the entrepreneurial or managerial efforts of others contain the hallmarks of a security under U.S. law.

The SEC calls on Market Professionals such as securities lawyers, accountants, and consultants to help maintain the required standards and also reminds any teams behind cryptocurrencies and ICOs that they must be able to demonstrate that their currency or product is not a security and also complies with applicable registration and other requirements under securities laws.

With regards to Main Street Investors, the SEC reiterates a number of warnings and also expects individuals to thoroughly research any projects they may be interested in. As there are currently no ICOs to date that have been registered with the SEC, the Commission views the cryptocurrency sector as providing greater opportunities for fraud and manipulation than more traditional financial markets.

As a result, the SEC continues to issue investor alerts, bulletins and statements on initial coin offerings and cryptocurrency-related investments and urges all members of the community to keep abreast of their updates. Retail investors are also urged to remain vigilant and act maturely with regards to any potential investments. When dealing with ICOs, in addition to the normal risks that accompany any financial investments there is also the fact that any funds invested into ICOs may cross national borders and end up overseas. There is the possibility that the SEC and other market regulators may not be able to effectively pursue bad actors or to recover funds.

The stance taken by the SEC essentially calls on industry professionals to follow best practices and for individuals to exercise common sense when making investments and is far from the heavy-handed approach some in the community had feared.

Last year the SEC has stepped in on a number of occasions to put a stop to ICOs that were violating regulations. In December, the SEC announced that Munchee Inc. had provided refunds to its investors after the agency concluded that the token sale constituted the offer and sale of unregistered securities.

The project was led by the Quebec-based pair of Dominic Lacroix and Sabrina Paradis-Royer, and a complaint against the duo was filed in federal court in Brooklyn, New York after it was deemed that they marketed and sold securities via the internet to investors in the U.S. and other jurisdictions.

Whilst in September, the SEC announced that it had put a stop to the REcoin Group Foundation and Diamond Reserve Club projects after it was discovered that they had promised investors sizable returns on investments backed by real estate and diamonds despite neither company actually being engaged in any real operations.