2 min readDigital Euro on the horizon? Central Bank of France to experiment with crypto for interbank settlements 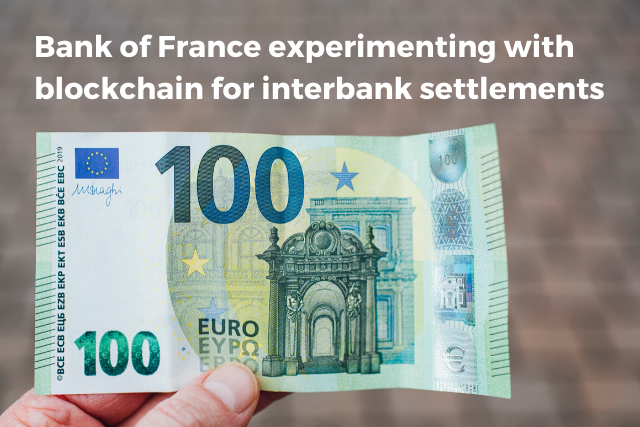 The Central Bank of France wants to experiment with digital asset technology to improve interbanking abilities, according to this “Call to Apply” document that came out last Monday, on March 30th.

The document lists all of the desires and goals that the bank has with cryptocurrency. At the moment, they are looking for third party help to drive their understanding of the technologies. They are looking to use blockchain technology for the achievement of a few interests and goals.

Their interest is two-fold. One, to explore the possibilities offered by crypto technology. Two, to identify concrete cases for integrating CBDC (central bank digital currency) in the process of clearing and settlement of tokenized financial assets.

The document continues to list three specific goals that they want to achieve:

From here, we can gather that the bank is seriously considering establishing a digital euro. Naturally, the Bank of France is not the only member of the European Council, so this project is going to be the way that it contributes to the general understanding of all National European Banks.

The Bank of France has stated that no money will be created as a result of this research project.

What are the real motivations for this research project?

Last year’s blockchain rally in China created a significant amount of authenticity for distributed ledgers. Combined with fear of losing currency value for the Euro, the National Banks in Europe seem to be gearing up to launch their digital version of the Euro.

If they launch a Digital Euro that will, in part, safeguard them by providing as much flexibility as the Digital Yuan. However, unlike China, the European Union has no way to drive as much attention to the rapid deployment of resources to the creation of blockchain companies and solutions.

In recent news, records for Chinese blockchain companies show that 70% of them are legally dead, while it is unclear how much blockchain can be found at the rest of them apart from the name.

Considering the landscape of blockchain integration by countries, we believe that China’s interest in establishing their own Digital Yuan and Facebook’s attempts to launch Libra. The general increase of conversation about blockchain in the finance sectors has lead the Bank of France to begin exploring this technology with all seriousness.

There is a lot at stake, and if the European Union and the United States are not ready to go live with their digital currency, China will be in a great position to reap the benefits and bring the Yuan to the front of the currency value markets.