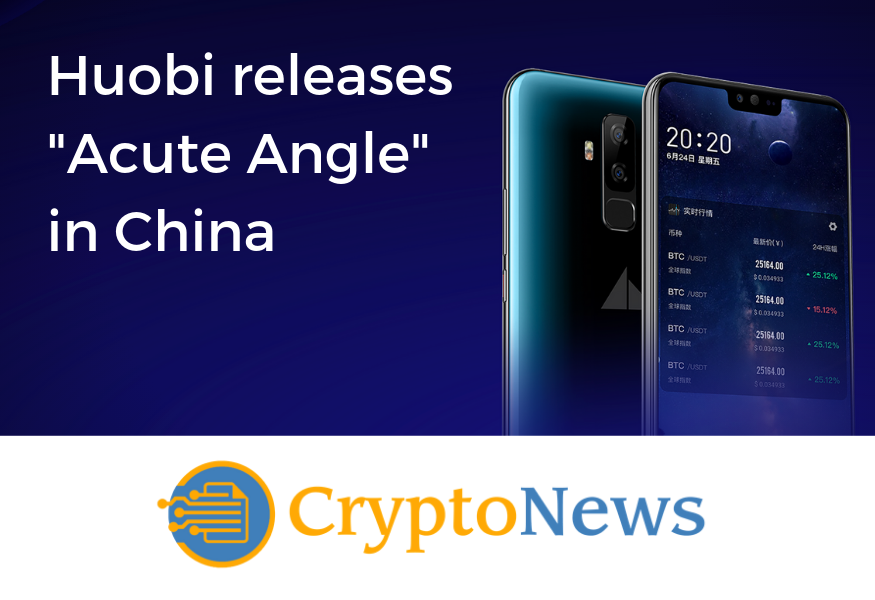 With the launch of their native token NODE on September 11th, Huobi has also launched their first blockchain phone, Acute Angle. First information about the phone were published in a press release earlier this week. Huobi Global and Huobi Capital worked together on the 6th Huobi Prime trading event, which included the phone and native token, which will run on both “The Whole Network” and the Acute Angle itself.

There is not much information to illustrate what NODE will be used for, but we know that the phone will reward its users daily with those tokens. Most likely the end result will be a phone that utilizes them to facilitate trade between users, to purchase apps, goods, services, and so forth. The phone features a suite of blockchain-related apps, many of them designed specifically for the cryptocurrency trader. Unlike most phones, the Acute Angle can give users notifications about specific market conditions and an easy way to execute trades at the right time. In addition, it will feature both hot and cold cryptocurrency wallets. At this moment there is no exact information in regards to which cryptocurrencies can be kept in this wallet, but we can theorize that the phone is most likely going to support all Huobi-supported cryptocurrencies.

Huobi Global’s CEO, Livio Weng, gave the following statement: “We think blockchain phones are a promising area for future blockchain industry development. As the industry develops and as innovations like 5G become increasingly integrated into our telecommunications systems, we believe more and more crypto communities will want to trade and transact from mobile devices. Given this, the need for devices optimized for blockchain seems clear. This move is our first step to meet those users’ needs.”

While the statement in itself is quite interesting, as it details some predictions as to what is going to happen with the industry in the near future, we observe a flaw between the phone’s capabilities and the statement. In the statement, Mr. Livio Weng explains his understanding of 5G being increasingly integrated into the telecommunications industry. Looking at the actual phone product sheet, we can see that the device is not going to be able to use 5G networks at all.

Whether this is a good thing (keeping the price lower) or a bad thing (not implementing future expectations) we leave that up to you to decide. Speaking of price, the Android-based blockchain phone will be set in the mid-sector, with a price of $515 at launch. This price is very competitive for the small “blockchain phone” market, with comparable models being launched for more than $1000. It is safe to say that the Acute Angle is a great competitor to other blockchain phones.

The company’s initial release of the phone will only be available to China, but they hope to be able to offer it to the entire Southeast Asia region by the end of 2019. Plans for a rollout in America and Europe are expected to realize sometime during 2020.

The phone is available to purchase from Huobi Global’s homepage or directly from the Whole Network website, but for now, it is restricted to Chinese buyers. Whole Network’s Acute Angle Phone Specifications: