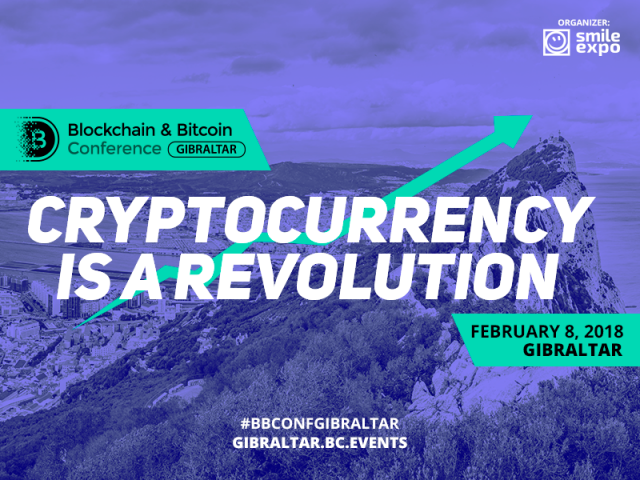 Blockchain & Bitcoin Conference Gibraltar will take place on February 8, 2018. It is a conference dedicated to cryptocurrencies, blockchain solutions and ICOs.

The conference will bring together about 300 participants: entrepreneurs, investors, developers as well as lawyers, financial experts and marketing specialists engaged in the digital currency and blockchain sector. Presentations will be divided into several sections.

Blockchain & Bitcoin Conference Gibraltar will feature the reports of 12 experts from different countries. According to the organizers, the pool of speakers is being expanded.

Garry Nuttall, UK (Managing Director at Distlytics Ltd). Topic: blockchain technology regulation in Gibraltar and other countries. In his report ‘Will 2018 be the year that Blockchain is Regulated?’ the speaker will consider the most likely ways of how legislation on blockchain will change in 2018.

Arwen Smit, UK (Co-founder & CMO at DOVU). Being an experienced expert in logistics, business coach and mentor of startups, Arwen Smit will talk about how blockchain use in freight and passenger transportation will become a driver of mass application of the technology.

Christopher Emm, Gibraltar(CEO at TokenKey). His report will be dedicated to the creation of a successful tokensale: how to correctly present the product to investors and conduct an ICO campaign without common mistakes.

The conference will also include the reports of Kambiz Djafari (Germany), CEO and Co-founder of Edgecoin.io (‘What is a token economically?’), Mohammed Tayeb (UK), Co-founder of Medicalchain (‘Blockchain in the healthcare sector’), Bogdan Maslesa (Cyprus), Founder of Universal Crypto (‘The Importance of Blockchain Education’); Juan David Mendieta Villegas (Belgium), CEO at Keyrock (‘How do we build a fair and efficient capital infrastructure?’) and others.

Exhibition of innovations and discussion of topical issues

In addition to speakers’ reports, the conference will feature a number of activities:

In October, Gibraltar authorities announced the legislative rules for blockchain companies and cryptocurrency exchanges, introducing a project of the corresponding law.

The regulation in this sector is suggested to encourage innovations. The introductions will become effective in January 2018.

Blockchain & Bitcoin Conference Gibraltar is aimed at revealing legislative novelties, answering related questions and helping the blockchain community to organize the work efficiently according to the new rules.

More project news can be found on the website of Blockchain & Bitcoin Conference Gibraltar.