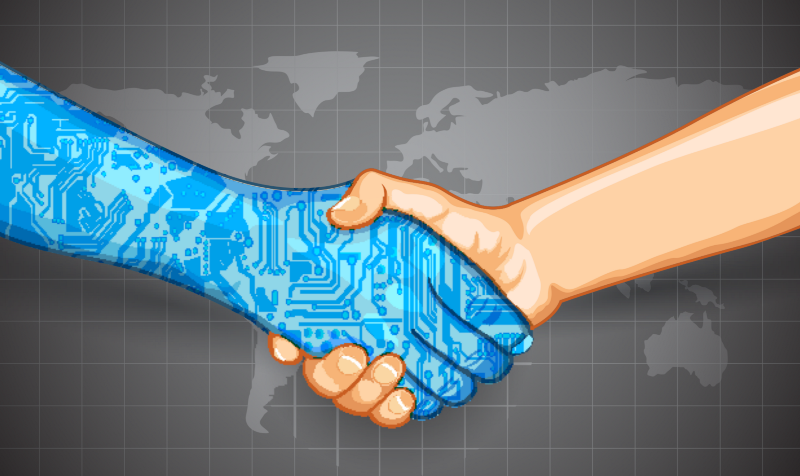 Blockchain is arguably one of the most promising technology innovations since the Internet emerged. It facilitates transactions and value exchanges without using middlemen, central authority or trust. Blockchain technology connects consumers and suppliers directly. It utilizes cryptography or codes to safeguard exchanges.

There is a mainframe or digital journal, which in essence is a decentralized database, open to scrutiny by those on the network. This system refers to computers connected with each other. It approves the exchange prior to verification and recording. For digital currencies, Blockchain keeps transaction details of the Bitcoin. At the same time, it prevents usage of the digital currency more than one time.

The arithmetic of blockchain is remarkable. The program makes use of special hardware to build an enormous chain of codes making is nearly impossible to copy. Verified transactions are implanted in the crypto-currency. These settlements are signed with a private key. It is a preventive measure against possible tampering. All transactions are authenticated in around 10 minutes by Bitcoin miners. Mining refers to the process of verifying transactions. It entails a number of independent authentications for transactions to progress.

Blockchain technology is often described as today’s database. The difference is users interact with blockchain in another manner. For technical experts or developers, this unique platform is a fundamental transformation in the technique of writing software apps in the future.

The more important thing is Blockchain will surely transform the overall status of E-Democracy (Digital or Electronic Democracy).

Stakeholders need to figure out five major ideas in the wake of this innovative computing model. These are the Blockchain, Smart Contracts, Decentralized Consensus, Trusted Computing, and Stakes (Proof of Work).

Blockchain is the core technology that makes Bitcoin viable. It is similar to data storage partially but not totally open to the public in an unbroken container space. It is possible to confirm stored information since the container has your signature. However, only the owner or specific program is capable of unlocking the container for security purposes. You alone have the private key to this data. Information entered cannot be modified.

Crypto-currencies are digital and not physical. These are not tangible or deposited in bank accounts. Yet, ownership of digital currencies may be transferred to others through documentation in the blockchain platform. The chain is not found in a single computer but administered by dispersed nodes which maintain a copy of the whole chain. It does not disappear because copies as well as access are distributed. This decentralized structure is robust and protected all the time.

One description for blockchain is an approach to software design that connects several computers together. These computers adhere to a consensus procedure for recording and disseminating stored information. All pertinent interactions are validated through ciphers or secret languages.

Smart Contracts (digital or blockchain contracts) are computer programs serving as agreements with pre-programmed terms and conditions capable of self-execution or self- enforcement. These contracts allow two nameless parties to trade with each other over the worldwide web without any broker.

Smart contracts are developed by programmers using smart contract development instruments. These are 100% digital and written with programming code languages like Java, C++, Python, and Go. The encryption delineates policies and outcomes just like the conventional legal contracts. It spells out responsibilities, benefits and fines for both parties under different circumstances. Cryptograms are executed automatically through the distributed ledger system.

This system deviates against the centralized scheme wherein a predominant database rules on validity or legitimacy of transactions. Bitcoin protocol depends on this distributed approach. It conveys authority and trust to the virtual network and lets its nodes document transactions continuously. This is done on a public block which generates the exclusive chain or Blockchain. This block contains a matchless fingerprint (hash) to protect transaction source validation. It eliminates the requirement for a central go-between. Consensus logic is not linked to the application. Apps are written to be decentralized. It is the initial layer of dispersed architecture for the basic procedure and regulates operations of the blockchain.

The key concept of trusted computing is more of a group of proposals along with concepts for locked-down computer architecture. This type of computing will ensure the software is running. It also allows apps to communicate with each other securely. Encryption keys are embedded in the hardware. These are not made available to the owner of the PC. The computer runs the OS if it is able to confirm identity and reliability. Ion the other hand, the OS communicates with remote servers. This provides security when it comes to identity/integrity of software prior to running the application.

Proof of Work is the nucleus of blockchain operations. It is the right to become part of the Blockchain technology. Proof of Work is a method of preventing users from altering records on the chain without restructuring this process. In other words, it is a primary component since it cannot be invalidated. This is secured using the cryptographic hash which guarantees genuineness. What is the downside? Proof of Work is quite costly. The estimated maintenance cost for Bitcoin is roughly $600 million annually. There are scalability and security concerns based on incentives for miners that may decline in the long run. This improved method is economical in terms of execution but expensive and complicated to compromise.

Software developers must become adept in writing decentralized applications facilitated by Blockchain technology. For their part, end-users ought to know more about the creation and usage of smart contracts.

The initial technology has glaring imperfections so multiple blockchains seem to be the right answer. Experts expect some of the chains to work together while others will compete with each other. The emergence of new apps matches the potential of blockchains to be the new milieu for development similar to web development in the middle of the nineties. This is a good opportunity for developers in creating so-called Blockchain Applications.

Blockchain introduced the capacity to implement trust protocol in government agencies depending on fairness or neutrality of codes and mathematics. The advantages of employing decentralized systems in government are honesty, efficiency and security. All these can lead to more responsible citizens. Likewise, financial blockchain endeavors also benefit the private business sector while public sector finance is experiencing the effects of the Blockchain phenomenon.

When government finances are stored in public blockchains, real-time data may be utilized to promote competence and good governance. It can reduce waste substantially within bureaucracies where ineptitude and confusion have become widespread. Enhanced visibility and transparency of blockchain systems can also contribute to reduce the barriers between a particular government and its citizens. In the end, it can encourage the people to participate in democratic processes.

There is no perfect government anywhere in this world. In the same manner, there are no perfect citizens. Yet, it is possible to build better democratic institutions through Blockchain technology. This immeasurable and global ledger (database) runs on millions of modern devices. It is open to everybody. Information along with money, deeds, land titles, identities and citizens’ votes can be transmitted, kept and managed privately. Trust can be created by way of mass cooperation and codes instead of powerful mediators like governments or banking institutions.

Blockchain supports values. It is possible to merge different aspects of people’s identities which include voter identification, drivers’ licenses, social security cards, passports, and diplomas. All these can be put together in one ledger and obtain integrated services without any need for many check-ins.

Blockchain upholds sweeping transparency. It is pivotal in restoring trust between certain stakeholders and their beneficiaries. Voters can now locate who gave donations to political candidates’ campaigns. Raw data published by the bureaucracy turns out as a platform wherein private corporations, organizations and civil society are able to create services.

Through the Blockchain concept, citizens can campaign for the preservation of government actions in public records. These can be stored in indestructible ledgers. There will be a system of checks and balances among powerful officials as well as general consensus for the greater majority. Privacy and citizens’ rights will be protected at all costs. There will be no random meddling on privacy, households, and families.

Malicious attacks against reputation will be prevented. Individual citizens will not have to worry about illegal arrests, confiscation of properties and interference on legal assemblies. With Blockchain, citizens can be given the same access to essential public services and social security. Technology and Blockchain can be potent tools for all people. Yet, these are not enough to implement changes that people worldwide have long dreamed of. The key is to reinvent the government institutions so there will finally be a new epoch of trust and authority. Each one should have respect for the other. Only then, can society look forward to absolute change for the better.