EIPlatform is developing a blockchain based platform to enable direct interaction between brands, participants and audience in the esports sector. They announce the Presale Phase of the EMI Token will be launched on May 14, 2018

Competitive Video Gaming – known as Esports – is becoming increasingly popular year after year. In the latest report, market researcher Newzoo predicts esports global revenues will reach $905.6m in 2018, up 38.2% on last year, and $1.65bn in 2021. In its early years esports sponsorship was largely endemic brands associated with gaming or computer peripherals, but more recently large mainstream brands such as Mercedes, Gillette, Red Bull and many more are getting involved.

The esports audience is very valuable to mainstream advertisers. They are mostly in their 20s and 30s, passionate, very engaged, and with a higher than average disposable income. As audiences for traditional sports are declining, more fans are turning to esports. According to an LEK Consulting Survey, already 40% of millennials prefer esports to traditional sports. Mainstream brands are starting to follow.

However, there are a number of issues facing the esports marketing world.

Complexity of the Market – esports can be complicated for brands new to the market. There are several game titles, genres, leagues, teams and tournaments and it can be difficult to understand the best channels to reach the desired target audience.

Scale – Esports revolves mostly around major tournaments, unlike traditional sports where smaller local competitions and league games happen frequently. As the scale of these increases, it is difficult for brands and advertisers with more limited budgets to get involved. Likewise, it is becoming more difficult for smaller tournaments and teams, and streamers with smaller audiences to gain access to the large advertising budgets available to their more successful counterparts.

Agencies and Intermediaries – These complicate the marketing landscape, fragmenting the industry and further reducing access to participants with lower budgets. Efficiency and return on investment is reduced by the number of “middlemen” involved in the industry.

Lack of Data – As a relatively new industry which is changing all the time mean it is difficult to get accurate and consistent data to measure the success of marketing campaigns. 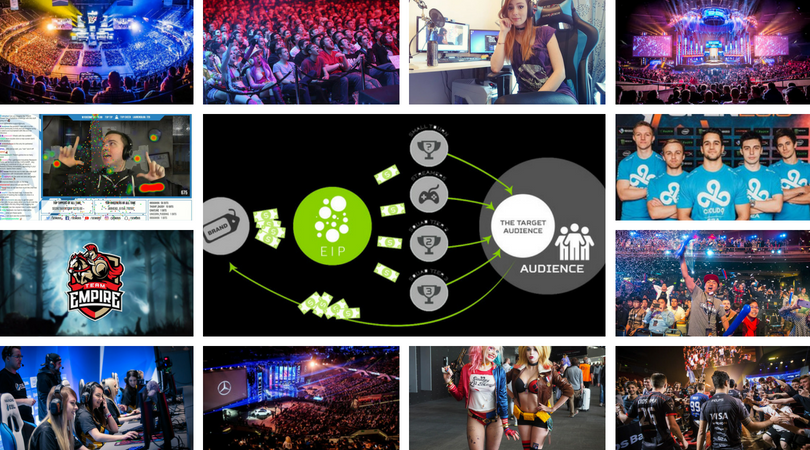 EIPlatform is being developed from the ground up to provide a solution to these issues by facilitating effective, direct interaction between brands, participants and the audience. One of the key aims of EIPlatform is to replace agencies with a single point of entry to the market for more personalized and efficient direct marketing. Security of transactions is a key element in the development of the platform, and one that is sadly missing from the current esports market.

The platform will simplify the current fragmented market and allow access for smaller teams to the large advertising budgets involved at the top level of the industry. At the same time, it will allow all sizes of new advertisers and brands to access the audience much more easily.

EIPlatform’s advanced data management and analysis, made possible by blockchain and smart contracts, will allow brands and advertisers to understand and target their desired audience segment more effectively. They will be able to measure the performance of their investments and identify new opportunities within the esports marketplace.

The EIPlatform currently has no competition in esports. With the team’s technical ability and unique understanding of the problems faced by those in the esports industry, they are confident that the concepts underlying the project are solid. The team is headed by Sergey Nevodnichiy, the founder and CEO of international most successful esport team, Team Empire. He says, “The scope of the EIPlatform is ambitious, but there is no doubt that the EIP team have the right combination of abilities to succeed in this venture. EIPlatform has the potential to be a game-changer for the esports marketing industry.”

The esports industry is digital, making it the ideal place to use smart contracts and blockchain technology. All transactions between entities within the EIPlatform ecosphere will be made using EMI. Consequently, demand is expected to be high and continue to rise as the project approaches completion towards the end of 2018, and launches in Q1, 2019. The full roadmap is available on the EIPlatform website.

EIPlatform is proud to announce the launch of the Pre-Sale Phase of the EMI token on May 14. This will run in 2 phases:

Phase 1 is from May 14-23 and will feature 25% bonus to encourage early investors.

For further information, please refer to the EIPlatform website and Whitepaper.