6 min readGetting Paid To Save The Earth With DeFi: Too Good To Be True? 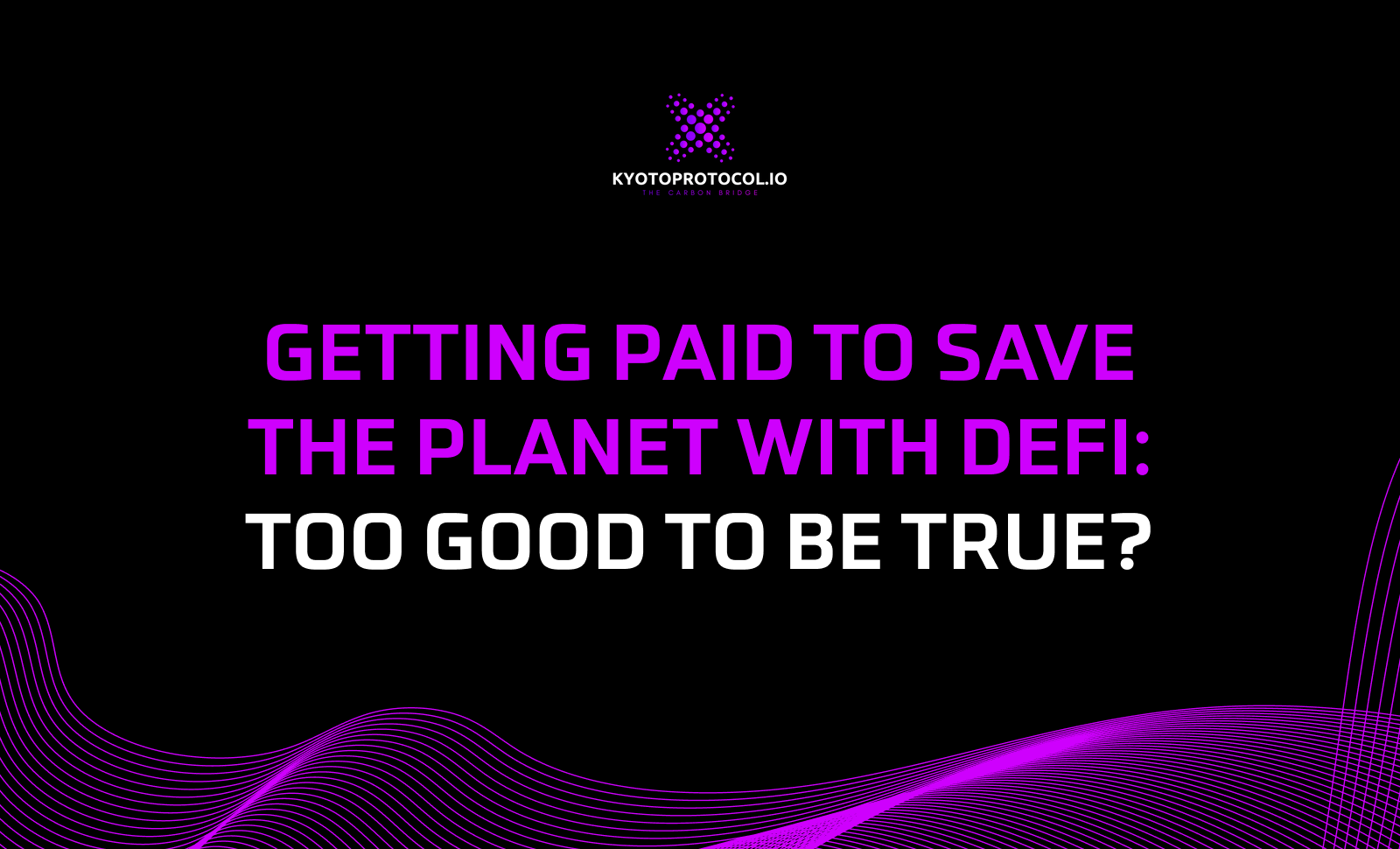 Some dream of money, some dream of status, others – of saving the planet. We know we are having big problems with the things our previous generations have caused with the emergence of the industrial and agricultural revolutions, but it has been incredibly difficult tackling each of the variety of factors that contribute to climate change.

At large, there is one main problem that persists: even if collectively, the world unites to manage bins better, cut down on red meat, use only renewable energy and resources, we would still face the fact that these single little different efforts by different individuals cannot help the planet at a substantial scale.

However, what if one was to offer you monetary value for your help towards reviving the environment, what if the right incentives were put in place for people to enjoy? Incentives, as generations of governmental control and world-defining events have proven, are some of the most powerful tools for tackling causes in groups to achieve success at a large scale.

With DeFi, The Planet Can Be Saved, But Not By The Ignorant

If people can work towards a very specific common goal and be handsomely rewarded for their efforts and contributions, even the most daunting and seemingly impossible tasks can be overcome and  greatness can be achieved.

Seeing the world of cryptography build up a wide ecosystem of people ready to start living in a more independent and decentralised way both structurally and financially as cryptocurrencies arise, it has become clear that through collective action and financial incentives, wonders can be done by a dedicated community.

DeFi and Web3 have given crypto enthusiasts power most have not imagined, whether through staking mechanics, yield farming or NFTs. However, what the majority of the aforementioned enthusiasts have not yet been introduced to are blockchain-based carbon credits by exciting new projects taking up the initiative to fight and win against climate change.

One such project absolutely worth mentioning and further discussing is KyotoProtocol.io – a fully immersive DeFi protocol reinventing carbon credits through an entirely new multilayer protocol. The project utilises the latest developments in smart contracts to create a long-lasting and superbly effective standard for the carbon credit industry on-chain, as the blockchain ledger and the data it holds perfectly aligns with the goals of carbon credits.

Why should Web3 enthusiasts care about this? Well, for starters, the ecosystem KyotoProtocol.io has built massively outcompetes projects of similar structures, but that’s not all – the reward potential for using blockchain carbon credits and staking on the platform is highest in existence today. KyotoProtocol.io is seemingly about to completely revolutionise carbon offset markets because of its well-thought out, very rewarding incentives for people to help the planet. How do these reward incentives work then?

KyotoProtocol.io has built a unique fair launch genesis pool that distributes tokens in a way so that enthusiasts can see a fixed compound interest return through an automatic staking function. What’s more is that whilst KyotoProtocol.io will launch on the Near Blockchain’s Aurora L2, the features it offers will be interoperable and supportive of all blockchains.

It is the aim of the project to enable partners and investors to earn passive but substantial revenue streams during their participation in carbon offsetting. To go into the specifics of KyotoProtocol.io’s rewards, we should add one of the most attractive points for any participant – the project will be offering an eye-watering 916,474% fixed APY for the first 12 months of active involvement – this is possible because of the positive rebasing $KYOTO token and it’s automatic compounding staking capabilities..

Moreover, those who hear the incredibly high APY might be put off by thoughts about fund security and protection, but the platform is structured in a way so that 5% of all fees go into the protocol’s own protection fund, The Kyoto Token Insurance Fund, making the entire project very valid and safe. The insurance fund lives in a separate wallet within the KyotoProtocol.io ecosystem, and sits there mitigating risk of downside, preventing bank runs, and making the protocol’s growth sustainable.

If the process of helping the planet heal whilst earning passive income was hardly accessible and difficult to manage, the goals could hardly be achieved.

Therefore, the only thing a user will have to do to start getting paid for saving the planet is buying and holding the project’s native $KYOTO token that gets auto-staked and allows people to simply watch their rewards accumulate. Another winning feature of the KyotoProtocol.io ecosystem is the fact that $KYOTO token holders are getting paid every 15 minutes, on a 24/7 basis, which makes the protocol one of the fastest auto-compounding protocols in the whole industry.

There is another crucial feature within KyotoProtocol.io ecosystem that helps the project make sense even to the most sophisticated and experienced crypto enthusiasts demanding more decentralisation – a token burning mechanism preventing  inflation of the supply called The Kyoto Token Burn Pit. 3% of all the fees go to the Burn Pit, the system is completely automatic, and helps stabilise the platform in case volume or liquidity undergo rapid changes – transaction routing is very transparent and all the compliance rules are met.

The last substantial feature of the KyotoProtocol.io ecosystem is none other than The Kyoto Token Liquidity Generator – a program automatically injecting liquidity into the market every 48h hours, liquidity that is split 50/50 between $KYOTO and $ETH and makes the KYOTO/ETH token pair always available for the user, with no exceptions. This also makes the protocol more stable, as well as way less susceptible to market slippage.

What Have We Learned Today?

For humanity to survive and thrive, we have to drop our carbon emissions by at least 3-5% per year, or 55% in total by 2030 -according to European scientists. But not every initiative or motivation has to arise as a result of a centralised government’s orders.

DeFi and Web3 have given us the tools we need for carbon offset maximisation through certified Carbon Credits on-chain, and KyotoProtocol.io is the perfect example of a project achieving both the technology and microeco(token)nomics for the right incentives to take steps towards tackling climate change ourselves.

Starting June 15th, 2022, on the KyotoProtocol.io Genesis Pool Launch, we will be able to offset carbon emissions by putting our money to work with synthetic carbon credits, receiving serious value through passive income streams from automatic staking.

Check out KyotoProtocol.io and its in-depth White Paper, along with their Twitter page to know more about getting involved in June.