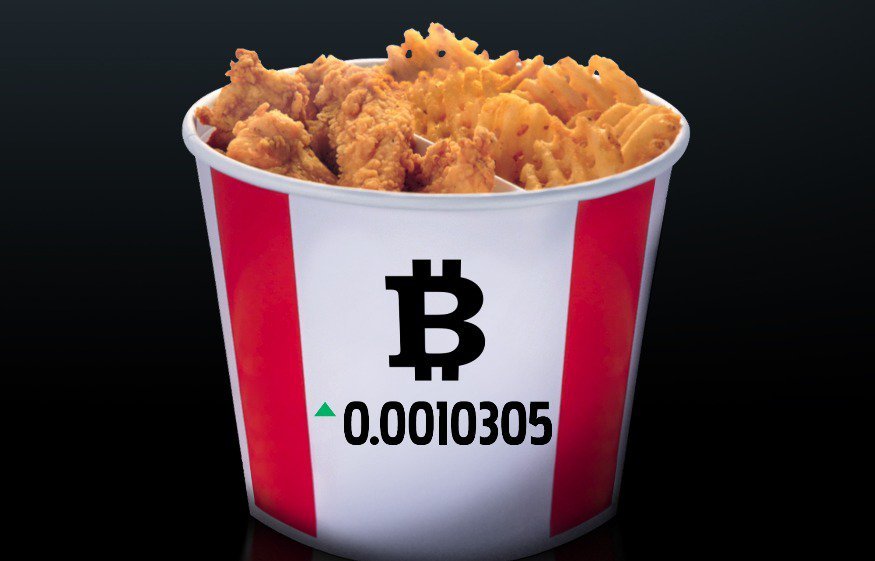 KFC Canada has recently boarded the Bitcoin hype train with the launch of a new marketing ploy entitled the “Bitcoin Bucket.” The new menu item, which can be purchased exclusively with Bitcoin, offers Canadian KFC consumers the option to convert their crypto directly into fried chicken.

The promotion was launched via the KFC Canada Twitter on the 11th of January:

“Sure, we don’t know exactly what Bitcoins are, or how they work, but that shouldn’t come between you and some finger lickin’ good chicken.”

KFC Canada presents The #Bitcoin Bucket. Sure, we don’t know exactly what Bitcoins are, or how they work, but that shouldn’t come between you and some finger lickin’ good chicken. https://t.co/2OKuCHk5Hb pic.twitter.com/UwaduB8toi

The Bitcoin Bucket, which is priced at $20 CAD, contains ten chicken tenders, any medium side, a medium gravy, waffle fries, and two dips. While it’s not possible to simply walk into any Canadian KFC and pay with Bitcoin, Canadian KFC fans are able to order the Bitcoin Bucket for home delivery via the Colonel & Co.’s website for the duration of the promotion.

KFC Canada has teamed up with cryptocurrency payment processor BitPay to allow Bitcoin payments via their website, which incurs a $5 processing fee for each order. The KFC Canada Twitter has also mentioned that they will consider accepting other cryptos as a payment method.

The promotional campaign was launched alongside a Facebook live video that featured a running conversion of the price of the Bitcoin Bucket in BTC for almost four hours. The KFC Canada website encourages diners to cash in their Bitcoin for buckets in a tongue-in-cheek product description:

“Welcome to 2018, Canada. Despite the ups and downs of bitcoin, the Colonel’s Original Recipe is as good as always. So, trade your bitcoins for buckets and invest in something finger lickin’ good.”

KFC Canada’s Bitcoin-based marketing stunt follows ailing photography company Kodak’s foray into the ICO arena, which resulted in Kodak shares rising as much as 90%. With the Bitcoin network becoming almost unusable for day-to-day transactions over recent months, however, it’s unlikely that KFC Canada will continue to offer cryptocurrency as a payment method at the conclusion of the promotion.

Samuel is a freelance journalist, digital nomad, and crypto enthusiast based out of Bangkok, Thailand. As an avid observer of the rapidly evolving blockchain ecosystem he specializes in the FinTech sector, and when not writing explores the technological landscape of Southeast Asia.