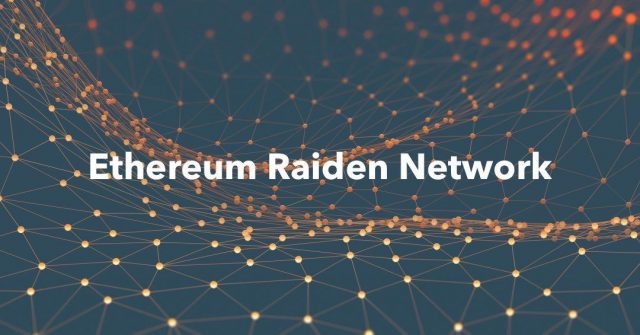 The Raiden Network is a development for Ethereum that seeks to move transactions off the ETH blockchain, making it more efficient for users and making the blockchain faster. It involves creating smart contracts between users so they can exchange funds between each other, and the overall balance is only settled when one of the contract is closed again, similar to how the Lightning Network works on Bitcoin, Litecoin and others. The release of the update with an ICO to help pay the developers has caused some controversy.

The Raiden Network release is a big development for Ethereum, bringing Lightning Network like off-chain payments to ETH, and it is important to keep in mind that the actual technology underpinning the cryptosphere is still in a nascent stage of development. Aside from the flashy ICOs seeking to solve real-world problems, there is a multitude of meta-level blockchain problems the community is facing. One of these is the sheer amount of strain the crypto boom is set to place the networks under in the near future. With the amount of data involved in blockchain app transactions, the ecosystem will be put under stress as the blockchains in question serve as both financial ledgers and massive stores of data.

The Raiden Network ICO seeks to address this scaling issue in the case of Ethereum. It seeks to create channels off the main Ethereum chain that allow payments to happen between people with less impact on the wider system. This is important, since the scale of the global payments market is higher than what the blockchain could handle itself.

On top of this, from a user perspective, this scale causes delays that otherwise would not happen in conventional payments systems, often around 3 minutes or much longer. In a world where instant and contactless payments are demanded by customers, this clearly puts a severe limitation on the ability for Ethereum to get wider adoption. Furthermore, since Ethereum is heavily geared towards smart contracts (which often impact critical contract arrangements that need to be settled quickly), this poses a big obstacle from an adoption perspective. The Raiden Network could free up a lot of room for smart contracts to flourish. There has been extensive controversy about the Raiden ICO, but first, it is important to understand the technology itself.

How does Raiden work?

What Raiden and other supplementary technologies like Lightning tackle is where the transactions go through. Instead of having to be verified (and stored) on the main Ethereum blockchain, a transaction can be settled between 2 or more parties on their own. Think of it like a sub-ledger of transactions between 2 people that only needs to be resolved with the wider network in its entirety, once the sub-ledger is being closed. This is a big step up from previously, where each and every transaction had to be verified and stored by every participant in the whole worldwide network.

With Raiden, this global consensus is not necessary, there only needs to be a local consensus which is then resolved by the global consensus later. This amounts to off-chain (Raiden) payments which are then settled on-chain (Ethereum) with smart contracts.

A smart contract is opened by the parties wishing to participate in the off-chain channel. A channel contains deposits covering amounts that can be spent. The status (balance) of the channel is the only thing that is saved. So when there are more transactions between two people the overall amount sent from one to the other is what is eventually cleared to the main blockchain, not the single transactions that make up this overall transfer of balance.

Where it gets interesting is when these channels are connected together as a network. As long as you have an indirect channel contact with another user, it is possible to transact with them. So balances can be transferred from person A to person C if both have individual channels with person B as an intermediary. This emerging network prevents the need to have an individual channel open with everyone for every payment.

More straightforward than it sounds

This mechanism is not rocket science, but does take a bit of explaining. Thankfully, the Raiden client will take care of all this so the user doesn’t even have to know about what goes on behind the scenes. They just need the address they want to interact with, deposit the funds they are willing to spend on the network, and that’s it.

To begin with, the Raiden network will not have a lite mode, so a full Raiden/Ethereum node will need to be run by the user. Another issue that also needs to be addressed is the dispute resolution: there is nothing stopping a user from being insincere about the final state of the balance in their channel when they “cash out” and claim the new token balance back against the main blockchain. There is a time period of a few hours when the other user can send the correct amount to the smart contract if they disagree with the fraudulent parties claims. As of yet, there is some discussion as to how to develop the most efficient way for users to monitor this dispute resolution process.

Other criticisms of the Raiden ICO

It is also worth mentioning for the Raiden Network, that there has been a mixed reaction to the fact it is being introduced with an ICO. Most importantly, Vitalik Buterin (founder of Ethereum) has said that he does not endorse the ICO. The criticism mainly revolves around the nature of open-source crypto projects. The Raiden team has not been paid for their work, so doing a token sale is in their minds an acceptable move. While Buterin has said the move is understandable, he has distanced himself from it and many in the community have criticized the decision to hold an ICO.

Crypto thought-leader Charlie Lee directly accused the Raiden devs of greed, pointing out that Bitcoin’s and Litecoin’s equivalent, the Lightning Network, was developed by devs pro bono. There are certainly questions as to why a token is needed, when existing Ethereum as gas would do the job fine. The Raiden team said they are not actively marketing the sale, which makes the situation even more strange.