4 min readReasons why Ethereum might be the new Bitcoin 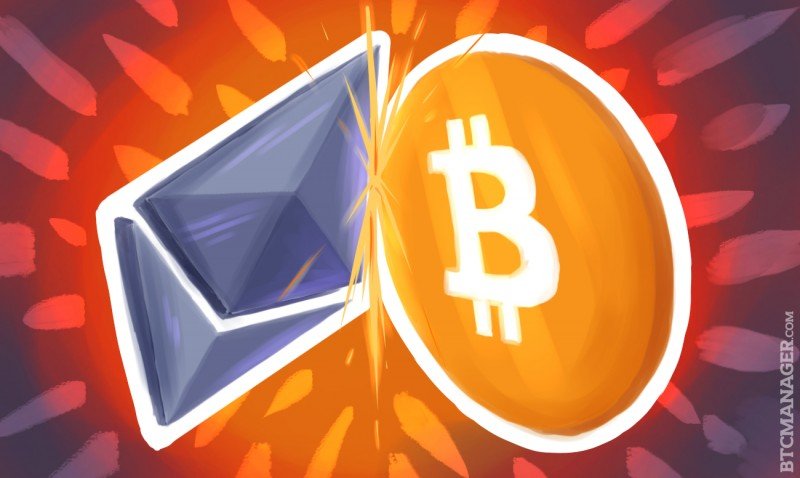 “The Flippening” is a loose term being used more and more in cryptocurrency discussions now-a-days. Bitcoin has remained the world’s largest cryptocurrency, both in valuation and in application, since its inception several years ago. To date, there has been no coin with the capacity to overtake Bitcoin. Many argue this has changed now that Ethereum has come along.

In the past four months, Bitcoin’s share of the industry market cap has dropped an astounding 48%, from 87% in February to 39% in June.  On the flip side, Ethereum, which has been on the market for less than two years, has seen its share rise from barely 5% to 31% in 2017.

Why “The Flippening” maybe closer than it appears

Ether was hovering around ~$9 until March this year, after which is has seen some massive growth to just below $400 recently. That leap has not been matched by Bitcoin, which has risen to a much smaller amount in percentage points during the past six months. People have mixed opinions on the subject: some believe that the future of cryptocurrencies lies in altcoins, others belive that Bitcoin will rise and shine after SegWit, others feel that Bitcoin will simply fade away, only to be replaced by Ethereum and other coins.

Another factor to take into consideration is that Ether has proven itself to be more than just a cryptocurrency. Ethereum makes use of “smart contracts”, a framework that allows many applications to be built over it. That means that Ether is the perfect system for Initial Coin Offerings (ICOs), crowd funding, share trading etc. So, in broader terms, Ether is more useable and can be expected to have a greater transaction volume in the future.

Ethereum is known to have a much faster transaction time than Bitcoin. Unlike Bitcoin, which has a block size of 10 minutes, Ether’s block size aims to be ~12 seconds. This means that Ether confirmations are usually much quicker than bitcoin. The technology behind the quick block processing is Ethereum’s GHOST Protocol.

Strictly speaking, comparing Ethereum with Bitcoin is like comparing apples with oranges. They were never actually meant to be competitors. Bitcoin was designed as currency – which is why nodes verify Bitcoin address. Ethereum on the other hand uses Ether as ‘tokens’ (mind you, I’m not using the word currency here) for its smart contract platform. The founders of Ethereum themselves propagate the idea that Ether should not be used as a currency, but the hype has made everyone consider Ether a cryptocurrency.

Another point that must be noted is that Bitcoin is inherently scarce: there is a cap to how many Bitcoins can be produced. Only 21 million Bitcoins are ever going to be mined, making the currency deflationary in nature. Ether is an inflationary currency as 18 million Ether can be mined every year, making it a currency of increasing supply. In theory, Ether’s price will fall over the long term, while Bitcoin will continue to grow due to the reduction in supply. Additionally, the number of Ether in circulation is already around 6 times that of Bitcoin (~ 92 million ETH to ~ 16 million BTC).

For the Flippening to take place, the ETH/BTC pair needs to reach 0.177. It is immaterial what the price of either of these currencies is, but once this value is reached, the market cap of Ethereum will overtake that of Bitcoin. It is at that point that Ethereum will officially be the world’s largest cryptocurrency by market cap.

Is the Flippening going to happen? This is a much-speculated topic that has recently caught everyone’s attention. The answer is that we don’t know. If Ethereum makes further gains then it is only a matter of time before Ethereum dominates the market. However, it must be known that the creators and maintainers of Ethereum have no intention to forcibly cause the Flippening, as according to them, “Bitcoin and Ethereum are completely different technologies which cannot be compared”. The market is surely anxious about such an event as it has never taken place before. Some people are optimistic that the rise of altcoins will mean more variety in the future, with no currency dominating more than 20% of the market. Some are afraid that August 1st will be the day when Bitcoin’s supremacy will fall for Ethereum. Whatever the outcome is, one thing is for sure: the cryptocurrency world has never experienced more uncertainty about the future than this before.

2 thoughts on “Reasons why Ethereum might be the new Bitcoin”