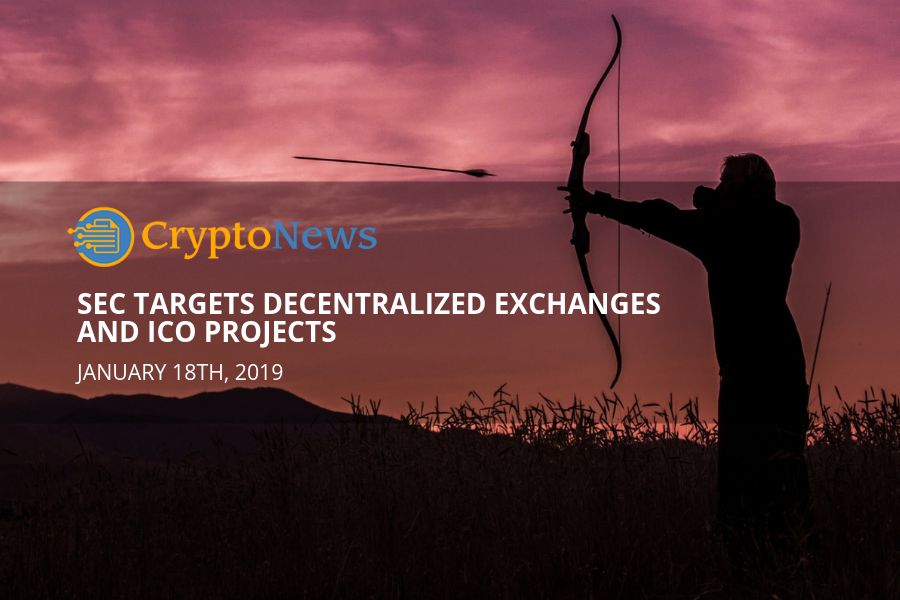 The U.S. Securities and Exchange Commission (SEC) continues its drive to “clean up” the cryptocurrency sector and has entered into settlements with EtherDelta founder Zachary Coburn as well as the former ICO projects Airtoken and Paragon. The subsequent rulings have cast doubt on the legitimacy of similar ICO projects and on the future of decentralized exchanges (DEXs).

The SEC has charged Zachary Coburn, the founder of the digital token trading platform EtherDelta, with operating an unregistered securities exchange. EtherDelta allowed users to trade ERC-20 tokens in a peer to peer (P2P) fashion, and the Commission has stated that the exchange provided a marketplace for interested parties to trade Ethereum tokens that the SEC deemed to be “digital asset securities.” Crucially, it used an order book, an order display website and a smart contract built on Ethereum, with the agency announcing:

“EtherDelta’s smart contract was coded to validate the order messages, confirm the terms and conditions of orders, execute paired orders, and direct the distributed ledger to be updated to reflect a trade.”

The platform did not register as an exchange or file for an exemption and according to the SEC: “Almost all of the orders placed through EtherDelta’s platform were traded after the Commission issued its 2017 DAO Report, which concluded that certain digital assets, such as DAO tokens, were securities and that platforms that offered of these digital asset securities would be subject to the SEC’s requirement that exchanges register or operate pursuant to an exemption.”

Stephanie Avakian, Co-Director of the SEC’s Division of Enforcement also said that “EtherDelta had both the user interface and underlying functionality of an online national securities exchange and was required to register with the SEC or qualify for an exemption.”

EtherDelta users conducted more than 3.6 million trades over an 18-month period and this led to Coburn cooperating with the regulator and settling the charges. Although he did not admit to or deny the charges, he paid $300,000 in disgorgement, $13,000 in pre-judgement interest and a $75,000 penalty. It was also noted that his cooperation with the regulator resulted in a lower penalty than may possibly have been administered.

The case highlights that even if a decentralized exchange or DEX can’t be easily shut down, it can still be pursued by the authorities and held liable for its activities. Coburn agreed to pay a total of $388,000 in penalties, despite leaving EtherDelta in late 2017, and the trades of the ERC-20 tokens on the platform cited by SEC took place between July 12, 2016 and December 17, 2017.

The SEC has also concluded that two Initial Coin Offering (ICO) projects produced tokens that were actually unregistered securities and has ordered the pair to refund their ICO participants. As a result of the decision, AirToken (AIR) and Paragon (PRG) have promised to register their tokens as securities, return investors’ money and to pay $250,000 in penalties.

CarrierEQ, the company behind both Airfox and Airtoken, raised $15m in its ICO. The Boston-based start-up planned to build a peer-to-peer (P2P) system targeted at the unbanked while Paragon raised £12m and tried to build a blockchain ecosystem for the cannabis industry. Interestingly both projects have suffered heavy losses over the year and may struggle to both refund investors and pay SEC fines, although much depends on how the teams chose to manage their ETH hoardings during the ongoing downturn.

“We have made it clear that companies that issue securities through are required to comply with existing statutes and rules governing the registration of securities. These cases tell those who are considering taking similar actions that we continue to be on the lookout for violations of the federal securities laws with respect to digital asset.”

Similar to EtherDelta, the US regulator found that both CarrierEQ and Paragon Coin held their ICOs last year after the SEC had released its DAO Report of Investigation, which clarified that ICO-based tokens might be viewed as securities. Neither Paragon nor Airfox registered their ICOs nor sought to obtain an exemption to registration requirements. As a result, the two firms are set to pay $250,000 in penalties and return funds to harmed investors. In addition, they will also register their tokens as securities under the Securities Exchange Act of 1934, and file regular reports with the SEC for no less than a year.

Steven Peikin, Co-Director of the SEC’s Enforcement Division stated: “By providing investors who purchased securities in these ICOs with the opportunity to be reimbursed and having the issuers register their tokens with the SEC, these orders provide a model for companies that have issued tokens in ICOs and seek to comply with the federal securities laws.”

The decisions may lead to uncertain futures for some ICO projects and DEXs as the SEC continues to regulate the cryptocurrency sector. EtherDelta was the leading ERC-20 based DEX until its sale by Coburn and the current leading Ethereum DEX, Idex has already moved to block New York state IP addresses in order keep in line with regulations. At the same time, U.S.-based DEX AirSwap has partnered with licensed securities dealers and avoids order books, order matching, and transaction fees altogether.

Although the SEC still hasn’t clarified which tokens traded on EtherDelta are considered to be securities, the message is clear that DEX developers and owners are who regulators consider liable for the decentralized technologies. This will lead to a number of DEXs choosing to sharpen up their activities over the coming year or fall foul of the US securities regulator. The ongoing SEC enforcement could also result in cryptocurrency companies and DEX operators moving their operations away from the United States. Hubs in Malta, Singapore, and England are governed by laws that are friendlier toward ICOs and tokens while the SEC is just getting started with its sweep of the industry.