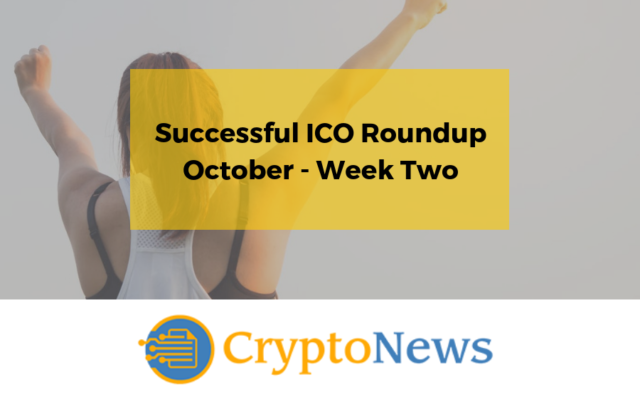 Welcome back to our weekly roundup of successful ICO projects. We create this series to bring awareness to the winners of the ICO competition, the ongoing process of coming up with creative and innovative ideas and facilitating the trust of investors around the world to participate in your dreams to change the world.

Not all of the ICOs strive to make a great change, some of them are simply innovators that create new technology. Others connect marketplaces and stakeholders using blockchain technology. There are thousands of opportunities to implement blockchains in order to provide additional value to existing and new businesses.

This week there were 26 projects listed on ICOBench, that are scheduled to end in the period between 8th of October and 14th of October. Most of them are not actually finishing in this period, but have chosen a different date to start their ICO.

Why they don’t come back to update their listings is beyond my understanding. Others failed and their websites were closed and deleted, or they had their accounts suspended.

The total amounts raised sum up to about US$26.055.772 which is a sizeable amount. The Pareto principle holds strong, with one project raising more than 80% of the total amount, which is always interesting to observe.

Let’s have a look at the projects.

While we are not sure how the SEC will treat this project’s marketing messages and promises, it certainly is interesting everytime we encounter a project that wants to support video game developers. CryptoHIT is a decentralized platform for video game publication, which will enable gamers to use their token, the Galactic Credit Token (GAC) to purchase in-game items, starter kits, and other benefits for the games that he plays on the platform.

They will enable games to also exchange their in-game resources with other players through an internal exchange. For starters, they claim their main focus is on decentralized games built on top of Ethereum. How they will proceed to fulfill the goals of their project, only time will show!

What started in 2013 as an attempt to bring blockchain into gaming through what is known as the “Huntercoin Experiment” has grown into a grander vision.

XAYA a research and development company just completed their ICO this week and they’ve created a platform where games can run serverless on a blockchain. True blockchain gaming, that’s what they call it. They claim that their platform will enable gamers to own their assets and enjoy 100% decentralized virtual worlds.

They provide tools for developers and encourage them to come up with new game genres, with the help of blockchain technology. They have a complete SDK and API documentation available for any developers that read our publication. Additionally, there is a promise that massive online game worlds can be sustained by this technology.

I would like to see what kind of games pop up on this platform and experience them myself. There is definitely room to push the fold, experiment, and innovate with video games.

Foresting is a social media platform that is trying to do what Steemit has done hopefully improving on the user experience aspects of the network. They want to create an ecosystem which is providing the users with a fair distribution of value for their content contributions. If you take the time to watch the video, you will see that they make a pretty solid point. Users and content creators, just like me and you are the ones responsible for the success of social media platforms such as Facebook and Twitter.

While these platforms were revolutionary at the time of their invention, now they are growing rapidly stale. Especially if we factor in that blockchain technology is on yet another upswing to get real-world implementation. This project is a promise for content creators to become part of an ecosystem that provides value back to the creators and users.

This would be a step up, and if successful they can overtake Facebook and Twitter. There have been attempts at the incentivized social media platform before, and most of them have progressively failed. But entrepreneurs keep trying and one of them is bound to be successful at achieving the critical mass of people necessary.

See you next week!

Two projects with gaming and a social network were successful this week. There is a lot of value in creating video games with blockchain technology integrated in the systems. Of course, the design of the smart contracts in play is very important, and it makes me wonder, how will they facilitate the creation of irrefutable proofs?

As for social media, that’s a different story in its own. Going up against the media giants is a brave endeavor, one that deserves kudos. Will they succeed in creating their vision of having individuals “plant” a content forest? I don’t know, but I do wish them a lot of success and I might go plant a tree on their platform when they get it operational.

What kind of projects will win next week?

Come back next Monday to find out!