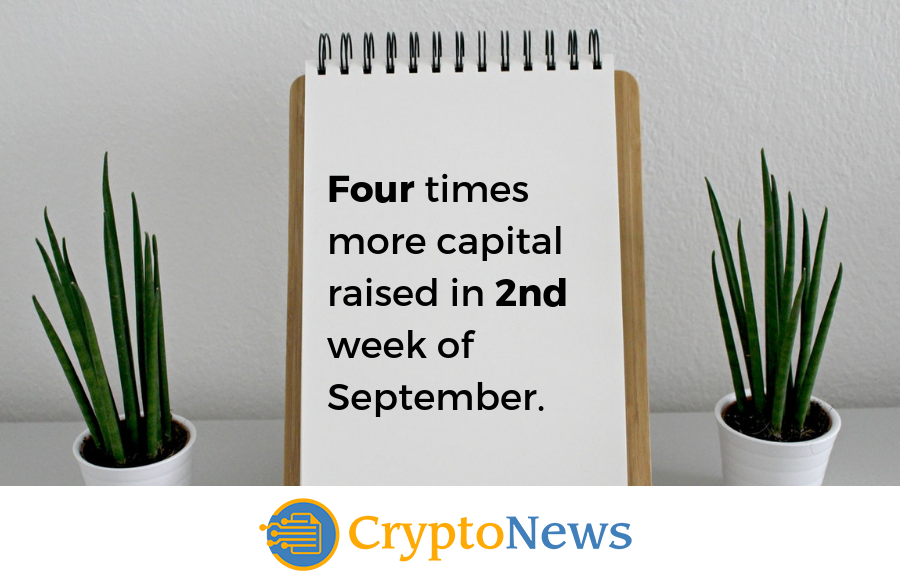 Last week, we created the first in a series of ICO reviews with a twist. We covered the successes of ICO projects that ended in the first week of September, which raised a little bit more than $21 million according to the information found on ICObench.

We said we were going to use a different tracker for this week’s article, but unfortunately, other trackers we looked at did not offer the same options to sort the ICOs in the order by which they are ending. Manually sorting through the entire ICO ecosystem is a great way to end up in the hospital (the one with white walls), so we decided against it. Instead, we are going to keep on using ICObench to create these articles.

Another change is that this time around we are not going to list all of the invalid ICOs that haven’t updated their tracking data. If their ICO is ongoing, or it has additional rounds, you will not find it here. Our goal with these articles is to provide awareness as to how much capital is raised regularly, and not drive potential investors to projects.

We encourage other ICO trackers to enable sorting by date of ending, and with a clear user interface. If you are aware of other ICO tracking websites that have this feature, please leave a comment to let us know. It will help us keep these lists and the tracking sites unbiased and in balance.

Without further ado, let’s get into week two of successful ICOs in September.

The second week of September is four times stronger than the previous one. Total of $88 millions of capital was raised and concluded by the end of 14th September. Total number of ICOs finishing between 7th and 14th of September is 15, and 6 of them are successful, which brings us up to a 40% success rate.

Of course, all of these have different duration and they have achieved significantly different results. The investment difference from the top and bottom performers is 309x times. Read the article for more details.

This week around we will start with the smallest winners, working our way to the top as we go along this article. The projects are varied and represent different industries, so it’s a good way to see what investors were interested in this past month (30 days, the duration of which most of these ICOs took place).

Proof of Health, on the Blockchain

Global decentralized platform for health that wants to empower patients and improve clinical outcomes. At the same time, they want to lower operational costs, and to achieve these goals they would create two tokens on the Ethereum blockchain, Vidamints and the MintHealth Security Token (MHST). They are resolving patient data fragmentation, which according to them is spread across multiple data silos, and this contributes to the 40-56 million deaths that are happening annually.

They want to improve the life of the patient and ensure great conditions for them. They want to get hospitals to perform active duty rolls, instead of leaving patients to passively heal.

Investors were not convinced, and this project gets the last spot, with only about $150k raised to fulfill their vision. While they might do it anyways, it’s most likely not the beginning they were hoping for, but having accepted them, they commit to giving their best shot at creating this health platform.

Marketplace for Travellers and Suppliers!

The tourist industry needed a better solution than AirBnb and CouchSurfing, and this is where RoomDao comes into play. They want to become a powerful solution for tourists, and enable lower rates, wider service range, and engage local communities around the world.

Their version of success is an equalized ecosystem where local companies and individuals can better compete with powerful search engines such as Expedia.com and Booking.com, who through their activities charge a fee for connecting the stakeholders (traveller and owner).

RoomDao is eliminating these costs that amount up to 23% and enables users to make deals through the platform for free. Not only booking, but also everything else a traveler may need, such as a car rental, transportation, and other amenities.

This is a platform for building applications that can enjoy instant and almost zero cost transactions. It combines a protocol called MURION to maintain consensus across the network, afterwards integrating data to their own PLASMA chain.

It’s difficult for us to see what innovation this platform is bringing, especially after EOS completed their ICO and have their platform operational. Competitors are always welcome, but this ICO is a long-shot from what EOS managed to raise.

Carry protocol envisions a world where consumers own their own data, with every purchase decision safely stored as a commodity in your control.

The project was well received and investors strongly supported the idea by investing a little bit more than $9 million into bringing the carry protocol to life.

Biotech is going to get a significant upgrade after GENEXI’s project is complete. Their version of success is a decentralized marketplace which specializes in biotech, provides support to startups, a platform for investors to discover new opportunities, and consumers to receive immutable and reliable data about products.

With a $31 million capital investment into this project, it is most likely that the team behind GENEXI is going to have all of the resources they need to bring this software solution to market.

There are challenges which prevent the industry from moving forward, and with blockchain technology, a lot of the risks regarding quality assurance, counterfeit products and lack of transparency in research are going to be resolved.

P2P lending V.2.0 is in the making, after securing the highest capital investment in the second week of September. Alchemy wants to further disrupt the lending industry i.e. debt financing.

Regardless of other platforms and competition, Alchemy is pushing forward to achieve the best possible results and provide multiple benefits to this P2P marketplace.

They want to make it cheaper, safer, and more accessible for individuals and companies to finance themselves or earn dividends on borrowing money to others.

The second week of September sees a lot less ICOs finishing, but the number of successful projects remains static. The amounts raised however, they have increased by a multiplier of four.

These articles are designed to provide some awareness about which ICOs are wrapping up, and what were their results.

Are you enjoying them? Let us know in the comments below! Your support and feedback are invaluable in these early stages of this article series.