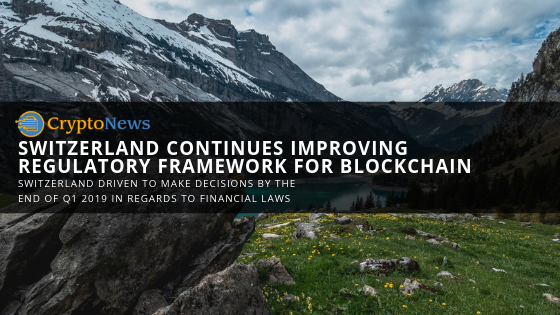 In a summary released on the 14th of December by the State Secretariat for International Finance of Switzerland, the various conclusions drawn in the regulatory meeting where the legal framework of blockchain and DLT in the finance sector was discussed on the 7th of December. Documents from the meeting itself were also shared with the public.

The most important takeaways are that Switzerland sees little to no need for legal adjustment in order to accommodate blockchain technology and remain neutral towards technology. However, some adjustments will be made, and the topics are going to be explored further. Switzerland is taking an extremely responsible approach to blockchain adoption.

The adjustments that will be undertaken in regards to financial law are affecting custodian wallet providers and any company that has an active participation in asset management, by making the organizations responsible for having a proper AML procedure.

Fully decentralized exchanges and non-custodian wallet providers are exempt from any form of AML requirements, as they are deemed to be a non-participant in the financial enablement of individuals. Instead, they are regarded as enablers of meeting supply and demand, and providers of software respectively.

As such, they are not considered a financial intermediary which means that it does not make sense for Swiss regulatory bodies to impose the implementation of AML processes, where the companies do not have the ability to control client’s behavior.

In order to get a better understanding, CryptoNews has reached out to Frank Wettstein, Co-Head of Communications for the State Secretariat for International Finance (SIF), for a comment on these developments. Mr. Wettstein confirmed the information being presented in the documents and the report. He reinforced the need for consultation and added that the current law framework is not expected to change much. With the technology-neutral principles, Swiss law can understand and accept blockchain technology and digital assets.

However, he adds that “after the consultation period in Q1 2019, depending on the results of the report, the law proposals need to be addressed by the parliament. That’s where the final decision will be made to include these changes.” We asked about what the ideal scenario looks like to which he said: “Following consultation and deliberation by Parliament, first amendments to the Swiss legal framework could enter into force already in the course of 2020.”

The Swiss Federal Department of Justice and Police (FDJP) are to create a consultation draft in the first quarter of 2019 together with the Federal Department of Finance (FDF), in an effort to achieve a few different results in civil, insolvency, financial market, banking, and anti-money laundering law. Each of these laws has a different objective in mind, but the general direction seems to be aimed at providing the enterprise sector with a clear-cut regulatory path to implementing or getting started with blockchain business.

By the end of the first quarter of 2019, The FDF and FDJP are going to create a reasonable case about how to improve the legal certainty for transferring rights through digital means, provide clarification on crypto-based assets, and how they would be approached in case of bankruptcy. Provide consultation on dealing with “valueless” assets in the case of bankruptcy, devise a category for the authorization of blockchain-based financial market infrastructure, and provide explicit instruction on dealing with decentralized trading platforms in accordance to the AML act.

One of the largest concerns that governmental bodies have in regards to digital assets is their ability to be easily transferred often without the help of any responsible third party. Hence Anti Money Laundering and Counter-Terrorist Financing are two very important discussion topics in any governmental panel, and Switzerland is not an exception.

In Switzerland, the law creation process goes like this:

This means that after consulting everybody that is relevant to the law, this very public endeavor may get curtailed for an indefinite amount of time, but due to the beneficial nature of these laws that scenario is highly unlikely.

The laws are helping businesses leverage blockchain technology and communicate rights through its use. Ownership is one of the big ones in civil law,

Switzerland is pushing the regulatory boundaries and extracting the maximum amount of value from this emerging technology. Slowly but surely, Switzerland is becoming the center of blockchain and DLT attention, and Zug is one of the most active hotspots.