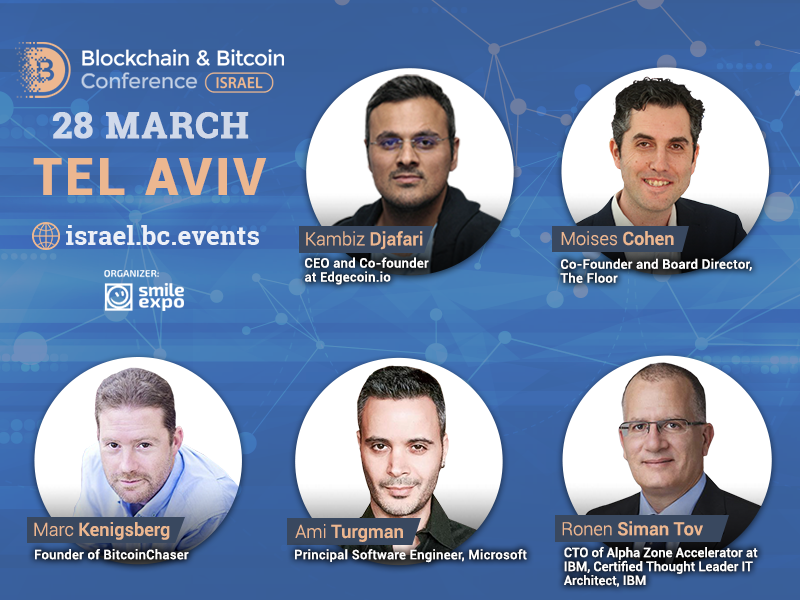 On March 28, Tel Aviv will host Blockchain & Bitcoin Israel, a large-scale event dedicated to cryptocurrency, blockchain and ICO. The conferences will be attended by the world’s leading experts in the field of digital technologies. Speakers of the event are blockchain entrepreneurs and crypto experts from different countries, including Ukraine, Malta, Israel, Germany, Hong Kong.

The key speakers include:

Kambiz Djafari, Germany (CEO and Co-founder at Edgecoin.io). One of the first investors in bitcoin, who has studied blockchain technology for many years. He used the acquired knowledge to create the educational platform Edgecoin, the main goal of which is to fundamentally change the traditional academic system. Kambiz Djafari will focus on one of the methods of cryptocurrency protection: Proof-of-Stake. He will tell about its advantages compared to Proof-of-Work method, and answer, why 2018 will become the year of PoS projects.

Moises Cohen, Israel (Co-Founder and Board Director, The Floor). He has worked in leading global corporations in the field of complex business and IT transformations for over 13 years. At the conference, the expert will talk about banking innovations since the Middle Ages and up to the era of blockchain.

Marc Kenigsberg (Founder of BitcoinChaser). Marc Kenigsberg operates various Bitcoin websites and projects and is a well-known ICO adviser. He has 15 years of experience in online marketing. He took part in different events, such as the London Affiliate Show, Ice Totally Gaming, the World Gaming Summit, Bitcoin and Blockchain conferences in Kyiv and Cyprus etc. Will discuss the problem of attraction users to the system during his presentation at Blockchain & Bitcoin conference Israel.

Ami Turgman, Israel (Principal Software Engineer, Microsoft). He joined Microsoft 10 years ago as a software engineer. Since then, he has held different positions in product groups that have developed innovative mobile and web applications. The speaker will focus on the basic protocol of Bitcoin, tell how miners help to solve the main problems of a distributed network.

Ronen Siman Tov, Israel (CTO of Alpha Zone Accelerator at IBM, Certified Thought Leader IT Architect, IBM). Ronen joined the IBM team in 2011 as chief architect. Over the past two years, he was in charge of the Center for Innovation of the Corporation. Ronen also advises Israeli developers, startups and high-tech companies on behalf of IBM. At the conference, the speaker will focus on the prospects of blockchain solutions, how they can help to improve business processes, as well as present the blockchain platforms developed by IBM.

Only on Saint Valentine’s Day: buy two tickets to Blockchain & Bitcoin Conference Israel for the price of one.

The special offer is valid only on February 14! Hurry up to use it!

Important: the minimum amount of paid tickets is at least 2 pieces.

See you on March 28 at Blockchain & Bitcoin Conference Israel