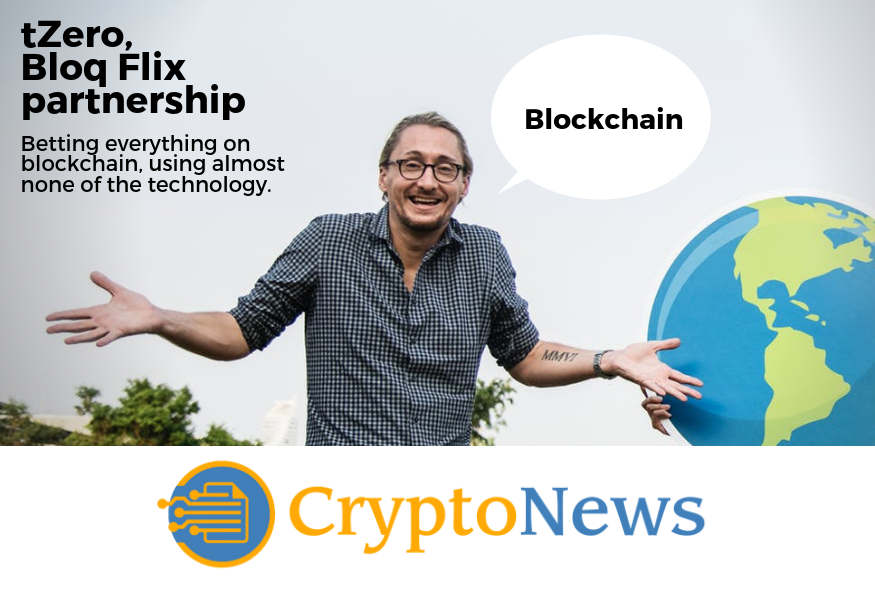 tZERO partners with entertainment financing company BLOQ FLIX to tokenize films, or at least that’s what they say in their press release published on the 12th of September. The reality is actually quite different and this is a pure misrepresentation of the truth.

tZero is going to provide Bloq Flix with the technology to tokenize entertainment financing, and the company is going to collect investments by selling the token at a flat rate of $5000 per unit (a unit consists of 5000 tokens) hoping to collect $20 million USD or rather sell 4000 units. Investors would receive 12.5% APR (annual percentage return) and their original investment after 18 months, according to their memorandum.

The major issue is that this token will not change anything except create a small bubble of capital that is free to be loaned to major production studios, such as Netflix, Hulu, BBC, Hallmark, as detailed in their accredited investment memorandum.

On the other hand, their website shows a different set of A-list Hollywood studios. Warner Bros, Columbia Pictures, Lions Gate, Universal Pictures and others. All of these are major studios in direct association with this company, which doesn’t bode well for the small films and independent producers.

Nowhere in their memorandum can you find a description of how blockchain technology will be used to do anything differently than traditional media financing does already.

The proposition is that once investors make their investments, the cash becomes immediately available for usage by Bloq Flix, and investors get tokens in return. The data tracking or tokenization parts of the puzzle are completely missing from any of their public documents.

The only thing that this would accomplish is being able to easily identify which investor invested how much. That would make Jumpstart Securities LLC, the designated broker/dealer quite redundant in a data-driven society.

It seems that the only reason that JumpStart is a part of this is to minimize the risk of SEC getting involved, by making sure that only accredited investors will participate in the action.

We’ve reached out to all of the parties involved with the press release in order to get more information, comments, and clarification, and they responded.

Alexandra Sotiropoulos, Head of Communications at tZero gave us a lot of information about their collaboration. We asked her to provide us with some simple answers and help us understand why they are using a token when there are no obvious benefits.

She explained: “The security tokens will represent an investment in a film co-finance / production fund. The security will work very similar to a bond. At tZERO, we firmly believe that security tokens are the next generation of how the world will trade value.”

We asked, “Why use security tokens, when the traditional model seems just as efficient?”

Ms. Sotiropulos responded with “That’s the beauty of our blockchain technology and protocol – an instrument using a traditional financing method can be tokenized, too.”

However, when you are issuing securities under crowdfunding exceptions to registration in accordance with U.S securities laws, there are limits to how much you can raise and what each investor can invest, depending on net worth and income. It is really up to an issuer to determine the goals for its capital raise. But whatever path they choose, we can improve the quality and efficiency of their security through distributed ledger technology.”

While we believe that tZero, Bloq Flix, and Ms. Sotiropulos have the best intentions at heart, their partnership is about creating a security token that will serve as a representation of investments made to Bloq Flix. The tokens as they are in the current plan and ecosystem, have no real use.

Maybe in the future when tokenization becomes more common and adopted by regulatory commissions, we will be able to see this type of token being usable. For now, however, and for the foreseeable future, something like this simply does not work as intended.