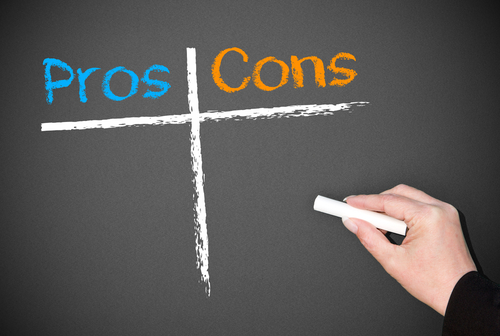 Pros and Cons of Bitcoin

Given that Internet technology has penetrated into nearly all the public sectors, it is unsurprising that the financial markets are displaying the same advanced. Digital currencies, Bitcoin included, are gaining huge popularity today due to various socio-economic pressures influencing various fiat currencies around the globe. Due to the decentralization of the Bitcoin network, its independence is a large incentive for those that are concerned with government influence, shutdowns, and global economic complications. This is one of the main reasons why Bitcoin is becoming the preferred currency by many. That being said, you should be well aware of the positives and negatives prior to engaging in the utilization of Bitcoin. This article serves to aid you in making a calculated decision. Because no system is perfect, Bitcoin is not safe from its own set of issues. The following lists the pros and cons of using this virtual currency.

As you have read, Bitcoin hosts its fair share of positive and negative aspects. An intelligent user should evaluate their need/requirements for using Bitcoin and answer whether or not it is right for them. Despite Bitcoin’s popularity in certain countries, it is still largely new/unknown to many people around the globe. As adoption and popularity continues to grow, Bitcoin is likely to assume immense proportions in scale. This bodes well for potential investors and current Bitcoin holders. That being said, Bitcoin as well as all cryptocurrencies share a higher level of risk due to their inherent market volatility. If you are risk averse, it is probably kosher to stay away from Bitcoin. However, those that are curious and are willing to take the risk may find that the advantages of Bitcoin or worth the risk.

Some final points are that Bitcoin users should be aware of any rules or regulations before conducting any transactions. This is mostly pointed at making sure any services are good involved in your transaction are not illegal in your jurisdiction (i.e. gambling). User’s should also investigate the authenticity of any website or service they are using for their Bitcoin transactions. As noted earlier, the anonymity of this currency lends itself to higher rates of illegal/malicious activity. Also, when learning to use Bitcoin, always test your transactions with small amounts first prior to dealing with larger transaction. This ensure you are comfortable with the system and prevents unwanted mistakes. Lastly, enjoy yourself and become part of the Bitcoin community. Many share the sentiment that this is the cutting-edge of financial and economic technology and taking part in it is taking part in the future.