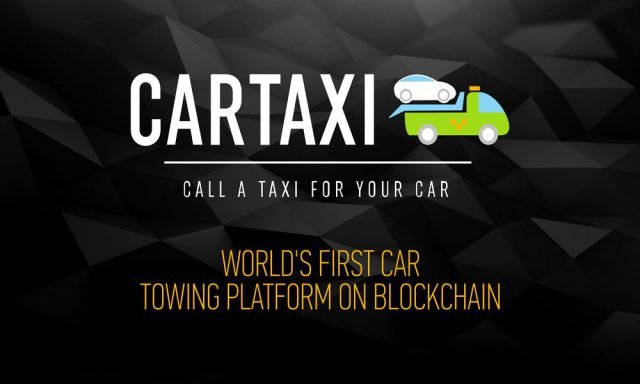 An Ethereum based platform, becoming the 1st worldwide towing aggregator

While the world is idling by, blockchain is coming to the motor vehicle towing market. Blockchain developers recently created and launched their new project – CarTaxi – the first global service for towing vehicles based on the blockchain. It’s a platform that brings together all car towing companies and is already revolutionizing this market. The project successfully operates in local markets and is active in more than 15 cities. A goal achieved in only 2 months from initial launch! As the global platform nears launch, CarTaxi is organizing a Pre-ICO campaign set to go live on August 30, 2017.

What drives the project forward

The world market capacity of towing service estimates more than 26 bln. USD. With more private and commercial vehicles hitting the roads, the need for efficient towing services arising due to vehicular breakdown, motor accidents, improper/illegal parking, impounding, etc., will become a priority to ensure obstruction-free traffic, enforcement of law and order, and even the convenience of vehicle owners.

By using blockchain and cross-platform programs, CarTaxi has created a network of registered and licensed car towing services. This project has made major breakthroughs in the quality of the service provided for corporate and private clients. CarTaxi introduces accountability to an industry which is mostly fragmented. It provides easy access to the right towing company at the time of need. The platform’s application makes towing service accessible with a single touch of a button on any smartphone.

This blockchain based service has over 1500 registered car towing companies.

With the blockchain implementation, CarTaxi gains an advantage over traditional aggregators, enabling global expansion in no time. It uses blockchain technology based on Ethereum and expedites payment transactions between car towing service providers and token-holders which altogether provides transparency in the oversite of company activity.

Smart contracts provide interfaces for operating business processes, starting from registering a new client and getting a new towing service provider connected to successfully completing a client’s order and settling payments with service providers and investors. With every new order, the smart contract records the client’s coordinates, vehicle parameters and estimated time of arrival of a tow truck.

If a car towing company does not reach its destination within the estimated time – it will be subject to penalties. The car towing service provider checks the order details and conducts an inspection for vehicle damage. If the details don’t match, the smart contract does not allow to proceed to the next step – loading the vehicle. When the order is completed, the program analyzes the final parameters and automatically pays the towing company.

Control over order fulfillment is especially important because the company plans to provide services for vehicle transportation over large distances, between cities and countries, in difficult logistical scenarios.

The proceeds from the token offering will be invested in further development of CarTaxi’s service. CarTaxi has scheduled blockchain activation during Q4 2017, followed by its expansion into USA and China in 2018 and Europe in 2019. With the opening of representative offices in India and South America, the platform will be available worldwide by 2021.

CarTaxi is an Ethereum blockchain based decentralized platform that connects all car towing companies into one online network. It allows customers to transport their vehicles quickly, efficiently and safely anytime, anywhere.