The continuing decline in market caps has created stress for crypto investors and advocates, but it is also creating a unique and challenging environment for Ethereum and other platforms that are designed to run decentralized applications (dApps). These networks are intended to be a framework around which internal tokens operate, and thus serve a key foundational role within the blockchain space. Their significance is thus dependent on a strong market cap, and a robust community of developers and nodes that ensure their stability and function.

One of the most significant issues facing the Ethereum ecosystem is the fact that the token projects that were launched over the previous two years have all been funded by Ether and Bitcoin. Now that the values of these cryptocurrencies have dramatically fallen, these teams have found themselves short of funds. Adding to this problem is the fact that the tokens themselves are now trading at substantially lower prices, creating further financial strain on the development teams.

The dApp ecosystem is also heavily dependent on public trust, and a firm belief that smart contracts and other advanced blockchain features will enter mainstream use. Although there is little doubt that blockchain technology is headed down this path, the fact that market values can collapse so suddenly has caused great concern for would-be adopters. Simply put, it raises the possibility that these platforms could fail, which would be catastrophic for any institution that relies on them.

Although the development teams for dApp platforms are generally opposed to widespread speculation, presently the vast majority of transactions across the blockchain space are a result of trading. The current price drops have impacted these numbers, with trade activity sharply down from this time last year. This fact has contributed to the decline in values in dApp tokens, thus further weakening platforms like Ethereum.

Besides these challenges, the current market environment also has potential benefits. One of the most significant is that it could play a key role in separating quality platforms from those with less potential. It is well understood that many of the hundreds of tokens on the Ethereum network will not succeed long-term. The current environment is thus hastening the inevitable, and paving the way for greater investment in those that are more worthy of adoption.

Despite present challenges, development of the major dApp platforms remains on-track, an no development teams have indicated that progress has been negatively impacted. This fact is not surprising, as these teams are far more concerned with progress and overall adoption than current prices. Also, even the most developed platforms are far from finished, and all valuation up to this point remains speculative.

The significant volatility of cryptocurrency markets is causing concern for many blockchain advocates, and the issues that it creates for dApp platforms is notable. There is no doubt that long-term success will require price growth and stability. Nevertheless, these declines are most impactful on speculators, and do not detract from the utility of the platforms themselves. The fact that blockchain technology will move into mainstream use is all but certain, and platforms such as Ethereum are all but certain to lead the way. 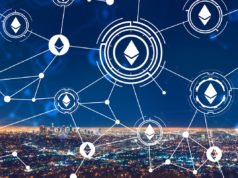 Blockchains in Charity – An Improvement?