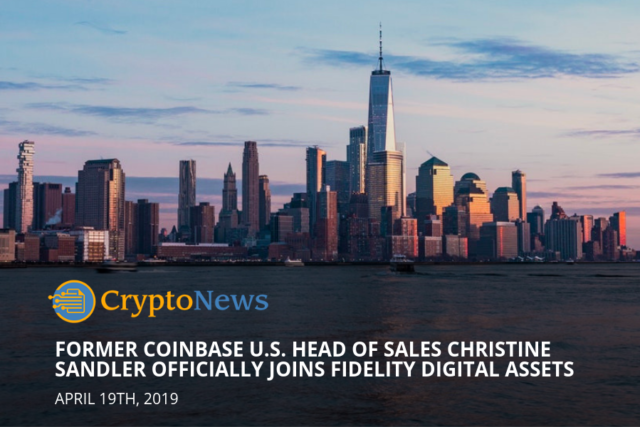 While being a relatively new player in the crypto ecosystem, Fidelity is going full steam ahead with overtaking this emerging market. Industry sources leaked this on March 29th, but now it’s official, according to a press release issued by Fidelity Digital Assets on the 10th of April.

Sandler is named Head of Sales and Marketing and will be responsible for the expansion of Fidelity’s market reach and for direct communication with existing institutional clients. From her office in New York, she is expected to help Fidelity satisfy the demand for cryptocurrencies by various financial institutions looking for a way in the ecosystem. Previously, Sandler has worked for Coinbase as Head of Sales and prior to that, with Barclays Investment Bank, NYSE Euronext and Merrill Lynch. This level of experience makes Sandler an extremely valuable asset, but time will tell if this potential realizes.

The president of Fidelity Digital Assets, Tom Jessop, shared his excitement for Ms. Sandler publicly. His statement included the expectation of leadership and support in dealing with the strong interest from investors. He added that investors are looking for a trusted provider before they are able to take an increasing role in the market, subtly positioning Fidelity as the “trusted provider.”

Bringing crypto to Wall Street is no easy task. The current financial system simply has no way to deal with currencies that they cannot directly control and manipulate. In order to fit into the existing infrastructure, Bitcoin and Ethereum are classified as special assets and not currencies.

However, the road ahead to mainstream adoption is still rocky. Before institutional and retail investors can have reliable sources of crypto, the groundwork needs to be laid out. Judging by their momentum, Fidelity is surely going to play a significant role in this process.