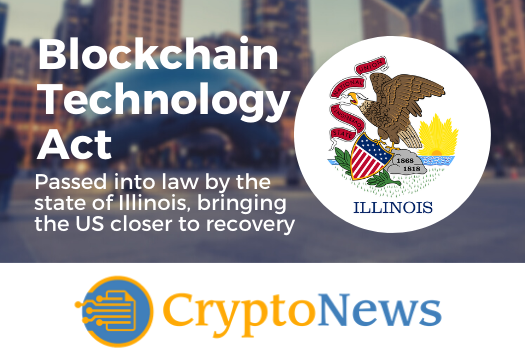 Illinois may prove to be the most friendly blockchain state in the U.S. because at the start of the New Year, on January 1st, the state legislators passed into law the Public Act 101-0514, otherwise known as the Blockchain Technology Act.

The Blockchain Technology Act provides a lot of security to blockchain businesses looking for a great legal environment. Through the act blockchain and smart contracts gain full legitimacy in the eyes of the law. They are now admissible in court as evidence and will be held up to the fullest extent of the law.

In addition to adding legitimacy to blockchain contracts and transactions, the law also prohibits local governments from pursuing to tax or demand licenses for businesses solely because they are operating with blockchain software.

Compared to New York’s BitLicense approach, Illinois is proving to be more understanding and appreciative of the technology. Other states that have passed similar legislations are Arizona and Vermont, the latter being the one that got the ball rolling.

This legislation is a welcome change in the pace of U.S.-based blockchain regulations and if it causes a domino effect it will help the country compete against China in the race for blockchain integration. The U.S. being a fully capitalistic society is unlikely to see similar implementations of blockchain, unless they are initiated by the private sector.

However, according to this Act, local government institutions are also able to leverage blockchain technology to support the performance of their powers and duties.

Alison Mangiero, President of TQ Tezos and public supporter of the act said that bills like this one provide the important clarity needed by blockchain adopters and developers, enabling them to feel at ease because blockchain transactions will get legal recognition, which she believes will lead to more innovation in the sector.

Tatyana Ruderman, counsel at InfoLawGroup Chicago, told CoinDesk that the law will indeed help motivate businesses to begin using blockchain-based records. However, she explains that the act is significantly vague in its wording in certain subsections, which could lead to legal challenges when the law is eventually going to be tested in courts by parties attempting to invalidate a blockchain transaction.

The Act also establishes a clear line regarding which documents must be presented in writing by businesses. The subsection generally speaks about notices and it includes:

In addition to these notices, blockchain may not be used to substitute written documents required for the transportation of toxic or otherwise harmful materials.

The Blockchain Technology Act is a welcome piece of legislation that will provide blockchain businesses, developers, and adopters peace of mind that their blockchain transactions and contracts will be recognized in the full extent of the law.

The existence of vague wording may lead to situations where a party may claim that blockchain contracts or transactions hold no value in the court. However, that is the attorneys and legislators to test pending court proceedings.

All in all, this law is a welcome change to the cold shoulder treatment given by most other states in the U.S. and should it result in a domino effect that will span the entire country, it will give the nation a fighting chance in the race for blockchain domination.