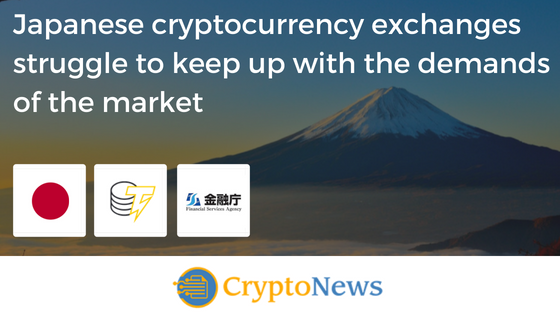 The Japanese Financial Services Agency (the FSA), was performing an on-site inspection of crypto exchanges in the country and they finally produced a document that explains the inspection, the findings, and suggestions, as reported by CoinTelegraph Japan on August 10.

The findings suggest that the organization has decided to inject increasing levels of oversight in the application process for new exchanges that are looking to operate on official levels. On-site inspections are the status quo for Japan now as any new exchange will have to join a waiting list of currently more than 100 companies. Their business model, plans, and the process will be inspected on-site before any decisions are made regarding the official status of the exchanges.

Following the major growth of cryptomarkets globally since last year, it is interesting to observe that exchange companies in Japan have failed to grow in response regardless of the increasing volumes of transactions. There are a lot of improvements to be made in terms of control systems, security, and even personnel.

According to the report, the FSA observes that $7.1 billion of digital assets are under the responsibility of these companies. With only 20 people on the average company team, it is estimated that every single employee these companies have is responsible for managing about $30 million of digital assets. Safe to say, the risk for internal corruption is great if the situation continues to stagnate.

That is unlikely because the Japanese are not known for passivity, in fact, they are one of the most industrious people in the world and we can observe them in action, dealing with the new markets and pushing the fold to create the necessary environment for not only adoption but also availability, security for both consumers and companies.

Unlike other countries that have a hard time in blockchain and crypto adoption, Japan is among the top crypto adopters in the world, closely competing with South Korea.

Back to the report, which identified the problems with the exchanges’ governance, auditing systems, compliance procedures, risk management, and business model. The report identified a lack of AML procedures among some of the exchanges, which consequently need to adapt and change if they hope to continue operations.

Local news agency Nikkei reports that the most likely registration of new exchange operators will resume, following the suspension of this process after Coincheck hack in January.

The FSA officially established the fact that their priority will be to investor protection and to provide this a new model of an ongoing review will have to be established. This will generate the compliance culture necessary to make cryptocurrency safe and accessible to the masses.