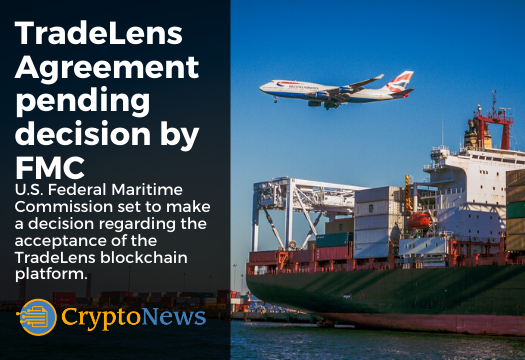 The U.S. Federal Maritime Commission is making a decision on the official approval of the TradeLens platform, as stipulated by an agreement made between IBM and Maersk and the participating parties i.e. cargo transport companies.

Starting on January 11th, 2020, the Agreement is passed into the public domain and comments are accepted until the 23rd of January the same month. The FMC has to make a decision by the 6th of February.

The U.S. Shipping Act of 1984 is a big and established part of cargo transportation that sets forth rules regarding competition and collaboration between competitors. According to this Act, competitors cannot collaborate without the supervision of the commission.

The TradeLens agreement that is being decided upon is designed to fulfill the rules set forth by the U.S. Shipping Act of 1984 and establish a baseline that will protect the interests of all parties involved.

According to the agreement, the companies can share data that will help them do business easier, with the exception of data regarding fees, rates, and, terms and conditions promised to customers.

International Business Machines Corporation (IBM) and Maersk GTD Inc. are not considered participating parties to this Agreement, instead, they are considered to be the “Platform Providers”.

So far, the agreement includes only five major cargo transport companies, whose executives have all provided their signatures, showing support for the agreement. These companies are:

The successful implementation of the agreement will allow these companies to continue sharing blockchain data related to cargo transportation between one another, as long as it doesn’t breach the U.S. Shipping Act of 1984.

The benefits for these companies to pursue their active participation in TradeLens and to fight for the legality of the platform comes from future expectations. The transport industry often experiences unnecessary hold-ups, document mix-ups, and other issues that would be (and currently are) nullified by the blockchain platform.

Considering the incredible amounts of fees imposed by ports around the world for late arrivals and departures, the executives of these companies are highly motivated to pursue a legal right to use blockchain systems and to share non-compromising data.

The agreement is laid out in a way that other companies can join the agreement by being voted in by other participating members while leaving only requires seven days advance written notice to the other parties.

If you would like to review the Agreement, you can find it on the official FMC website. Simply click on the number under “Most Recent Filing” and you can download the agreement for your review.