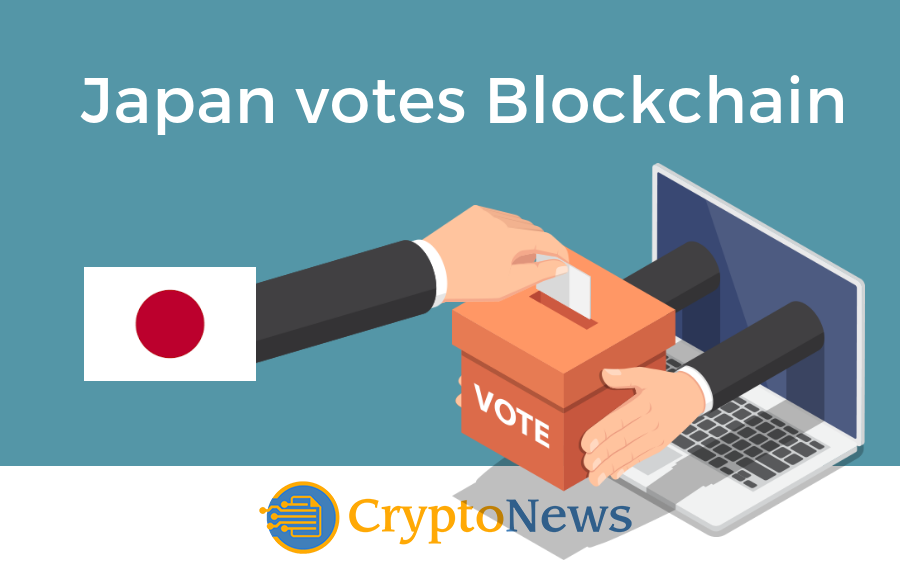 On September 2nd, Japanese media outlet The Japan Times broke a story about the latest news coming from Tsukuba, a city in the Ibaraki Prefecture. This place is considered to be a scientific center, so it does not come as a surprise to discover that they will utilize blockchain technology.

They want to leverage existing governmental structures and systems and enable citizens to take part in the decision-making process. The way they do this is by connecting the “My Number” identification system to a blockchain solution that prevents the votes from being manipulated with or even read before the allocated time for the session has passed. The greatest benefit for Japanese citizens is that they no longer have to leave their homes in order to participate in anything voting related. Most other things have already been taken care of through the highly advanced system the Japanese have developed for themselves.

Lately, everything has been about the blockchain. And rightly so! This technology has been around for a decade, and we have already seen many interesting (and useful) implementations and projects come to life.

The same is happening in Tsukuba, the first city in Japan to use a blockchain solution that helps citizens vote from the comfort of their own homes. At the same time keeping everything running smoothly and securely, with nobody having access to the data until the allocated time has passed. This city has used already used the solution we are talking about right now, and Mayor Tatsuo Igarashi applauded how easy it was for him to use the system, regardless of the high expectations of complexity and confusion.

The general administration does not support a wide-spread adoption of a blockchain solution to facilitate systems typically upheld by human beings. This means that the voting system is limited to selecting proposals for social betterment and contribution projects. The main reason behind the distrust is most likely the fact that even a decade later, blockchain technology is still a foreign concept for many, even in Japan. It’s easy to forget that other people don’t understand what the blockchain is and the potential it has.

There are two problems illustrated in The Japan Times article:

And we have decided to share this article directly with the Mayor Tatsuo Igarashi and Prof. Kazunori Kawamura a professor at Tohoku University, who has a lot of interest in the process of voting and elections, which can be seen on his academic record and offer to them a potential solution to both of these problems.

I know, you want me to get on with it and serve everything on a silver platter. I want to do that too, but I also want to check if you actually read the article. Because if you didn’t, you might miss the bigger picture. Or you might have just clicked through and we lost you for a while. But I hope you are still here, reading and waiting to see what solution we have come up with, and how closely related is to the one you already have in your head.

The first problem has a few simple solutions:

Number one and two are simple, especially if you’ve done anything Ethereum related.

Number three, however, is a wild beast. The way I imagine that working is very simple. Voting is a legitimate process, and people have only one government issued ID. Why do they need a password, beyond what they already use for other services? Instead, they can use their identification to log in to the system and have the instant ability to vote on ongoing proposals. There are a couple of concerns here, one being that somebody would steal the card and use it, which is unlikely to happen in Japan. The other one being that the blockchain requires a password to function in an encrypted way, it needs that oracle answer. That leads us back to the original statement, that they most likely already have a password for other services. If they are forgetting the password they should already remember, then that’s a problem with a different nature.

Second problem is that citizens are unable to verify or easily know the status of their vote. You click a button and pretty much nothing happens “Did I vote? Was it good? 良かったです?”, so it is easily understandable why some people were confused. Who wouldn’t be, especially as this particular blockchain prevents not only changes, but also viewing the results until a specific time comes.

At least for the “certainty of vote” part, there is a simple solution. Create a tokenized approach, which would require citizens to opt-in a voting session. With a click of a button, the system gives them 1 voting token, which they can clearly see is in their possession. This voting token is designed to be used only for the particular session they opted in, and once used the “balance” goes to zero.

This kind of approach will make it visible and understandable for users (the majority of whom beginners to blockchain) that they have successfully given their vote. They will be considered and a sense of pride and joy overwhelms them, as they are fully aware of the fact that they have served their community with their voice.

We have a lot to learn from the Japanese. They are really industrious and have a deep respect for life and tradition. At the same time, they are wacky, kind, and open-spirited people. Most importantly, they are quick movers and strong adopters of blockchain technology.

They take good care of their people, and the people take good care of the country. It’s a fluid system which works really well for them and has made them incredibly rich and technologically powerful. “My number” their government identification system is being used for various purposes, and now they are building blockchain systems to explore additional options. If you know somebody that likes the Japanese and their culture, share this article with them. It might be the tipping point that gets them interested into blockchain.