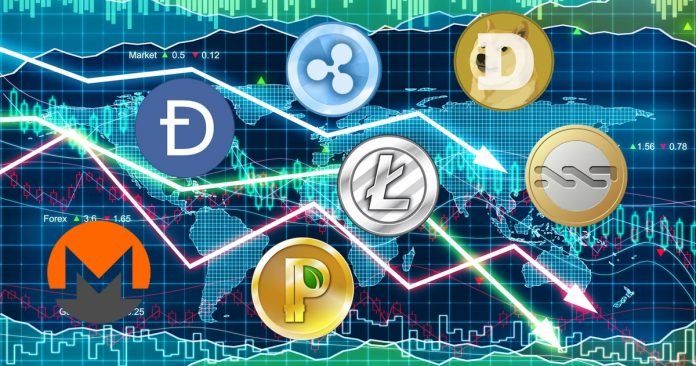 Bitcoin’s recent price surge has once again created volatility across the crypto space. Major altcoins have seen significant price fluctuation since the beginning of the month. Although these tumultuous periods are not new, some notable differences are evident during this current cycle. Examining these differences may give insight into crypto adoption and investment trends. There is also very clear evidence that the investment market is maturing, and entering a new phase of value and legitimacy.

One notable difference in this current phase of ups-and-downs is the fact that altcoins are no longer linked. Since October 1st, each major coin has performed independently in terms of fiat value. Some alts, such as NEM and Dash, have declined significantly. Dash, for example, is trading at $290, down from from $323. Other alts have increased; Ripple has surged twenty percent, from $.20 to $.25, and Litecoin has increased from $55 to $60.

Interestingly, when traded against Bitcoin, all major alts have declined since at least September 1st, regardless of their fiat values. Given Bitcoin’s significant rise, it seems clear that altcoin investors are trading their respective coins for BTC. It is thus safe to assume that many of these are short-term investors, who will no doubt begin to sell-off their Bitcoin once this present spike levels off. It is impossible to know Bitcoin’s current price ceiling, but these, and other traders, are going to start taking their profits soon, which makes a price correction almost certain.

An important fact to consider when examining the current period of volatility is altcoin adoption rates, independent of fiat values. Simply put, altcoins are surging in popularity across the globe, as people and institutions learn more about them. Ethereum, for example, is down significantly in market cap since late June. However, its growth in usage and development has been stunning. Hundreds of organizations, large and small, are creating Ethereum-based systems. The current price of Ether is of little significance when compared to how large the network is likely to become. The same can be said about similar platforms such as NEM, Neo, and Waves. Their true values rest with how they are being implemented, rather than any current market cap.

Bitcoin’s current move above $5,000 further anchors it as the flagship cryptocurrency. It now has 54 percent of the current crypto market cap, up from a low of 38 percent in June. It can certainly be assumed that Bitcoin will not relinquish this top spot in the near future. Nevertheless, the groundwork continues to be laid for alts to move up. Most fiat exchanges now enable users to purchase altcoins directly, which could reduce Bitcoin’s role as the gateway for crypto investment. In addition to the aforementioned network growth, alts are being scaled and upgraded much more quickly and efficiently than Bitcoin, which will make them more technically appealing.

The most important takeaway from this current episode of volatility is that altcoins are rising and falling on their individual merits. Several cryptocurrencies have become large enough to distinguish themselves in the eyes of investors and users. Many of these cryptos are no longer being compared to Bitcoin, but rather are being evaluated as the unique platforms that they were designed to be. Although price fluctuations are a near certainty moving forward, their popularity and use will only grow.

In terms of investment value, one irrefutable fact is that cryptocurrency is now a permanent part of the global financial landscape, and the crypto market is beginning to resemble that of fiats. Rapid changes in value are common in all markets, and the fact that cryptos are now moving independently demonstrates that their acceptance is moving beyond the core community of crypto advocates, and into the mainstream.

One thought on “Altcoins Volatile as Bitcoin Surges”