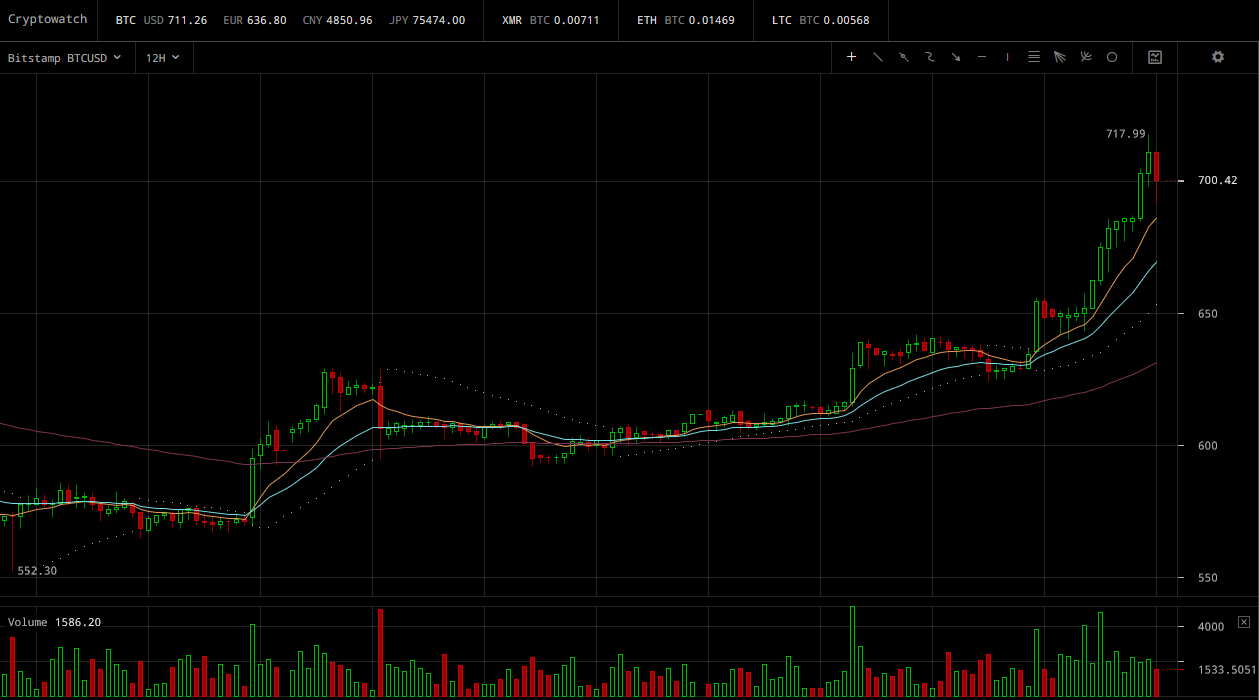 While Bitcoin’s price is quite erratic indeed, the coin does occasionally go down and up- and it seems that today is one of the days where it is going to go up.

After a long period of stagnating and slowly falling prices, bitcoin seems to have regained its groove and has quickly ascended to the high price of 717$. In just 7 days, from October 21st to October 28th, Bitcoin spiked nearly 50USD on popular exchanges like Poloniex.

While some traders are saying that the coin won’t get any higher than it is now, we expect at least a 5% increase in price. As of now, Bitcoin has reached a market cap of nearly 11.45bn USD, indicating a very bullish trend.

Although the price is indeed rising at a fast clip, it’s quite possible that it will rise further than it already has- the newly-launched cryptocurrency Zcash reached nearly 1500 BTC on Poloniex the very first day, and although it did reach quite an impressive price, the coin has taken an even larger fall- it’s now valued at just around 2.8BTC on Poloniex, albeit with a volume of nearly 3215 BTC on Poloniex on just the first day.

Another newly-created cryptocurrency (or a token if you like to be specific) was Iconomi, rising to the price of 0.001BTC shortly before falling down into sub-ICO prices, as it’s gone downwards to just 11 cents. While things don’t look too exciting in the future for the cryptocurrency, the team working on the token promises dividends on tokenholders in the form of Ethereum- something that may entice some buyers. This may be a long ways ahead, however, with no date scheduled for the launch of the Index platform which will produce the dividends that are supposed to be distributed among holders.

Even these was not enough to completely suppress Bitcoin’s ascent to beyond the 700-USD mark, however, showing that it might indeed have a longer journey ahead. Although many new things are happening today and all seems to be well, many altcoins such as Ethereum are taking a beating- it has fallen nearly 6% with a slow recovery to the price of around 10.50USD. Not everything today is going completely perfect for most, with a prime example being Ethereum and Iconomi.

Bitcoin Price Remains Flat, but Reasons for Optimism Are Emerging

Altcoins Are Starting To Rally, Yet Crypto Winter May Not Be Over