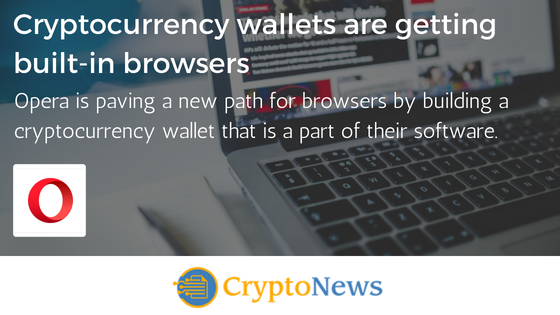 On August 8th, Opera through a press release announced that they will launch a browser that features a pre-installed cryptocurrency wallet, as reported by CoinTelegraph.

Opera has been spearheading and competing for crypto attention since this July, as evidenced by the release of a wallet feature on their Android app. The plan seems to be working as Opera has communicated that there are a strong interest and a positive response from the global crypto community.

Regarding the latest desktop browser, it will work in a similar way to how they enabled users to connect their WhatsApp messenger and access it online. Users planning to use the wallet will be able to use their Android app and connect it to the browser by scanning a QR code, which will communicate the permission and access capabilities for the wallet.

For now, there is no available information regarding when and if iPhone apps will be available for the wallet. According to Opera, the wallet is a user-controlled wallet, which means that the company does not have access to the private or public keys generated by the application.

It seems that Opera is placing a lot of value in making sure that users feel comfortable and secure, by ensuring them that their privacy is guaranteed when using their software. Being a major browser provider, we are confident to believe that they have taken the necessary steps to provide at least the same level of security as any other HD Wallet such as BTC.com and Blockchain.info.

The ability for one to have access to their wallet is not new, but Opera is making significant improvements to the wallet usage and security process completely removing the need for passwords. In fact, users will be able to sign transactions and access their wallet using only their fingerprint.

Another improvement that Opera has included in their browser regarding cryptocurrencies is the inclusion of anti-cryptojacking software, as reported by CoinTelegraph. This software prevents unauthorized use of your computer or mobile device for cryptocurrency mining, especially recognized through an app called CoinHive.

Unfortunately the number of supported cryptocurrencies is limited to ERC20 tokens and Ethereum, but that’s also a wide enough number. Hopefully they will not ignore other relevant cryptocurrencies such as NEM, Dash, Litecoin, and Bitcoin, although we do understand why these implementations might prove to be more challenging than Ether and ERC20.

Opera is making significant steps to position themselves as the best browser option for cryptocurrency users. This is an effort that leads them to provide even more value than crypto-first browsers such as Brave.

Furthermore, it suggests forward thinking on behalf of the Opera team, which enables us to conclude that the company believes in cryptocurrency and blockchain and understands that the technology is here not only to stay, but also to thrive.

At this current stage in evolution, we are transitioning from infrastructure to consumer-ready blockchain solutions. While this transition may last a couple of years, the momentum is solid and there are minimal chances for widespread failure of innovation in this space.

With any emerging technology, there are a lot of companies that will crash and burn, but the ones that make it will embed themselves so deep in cryptocurrency and blockchain culture, as they will be necessary for the operation of many systems.

While Opera, in this case, is not providing any infrastructural solution, they are giving us a promise, and giving other browsers a challenge. We hope to see others follow in their footsteps, as we continually revolutionize the world, and solve old problems, with brand new solutions.