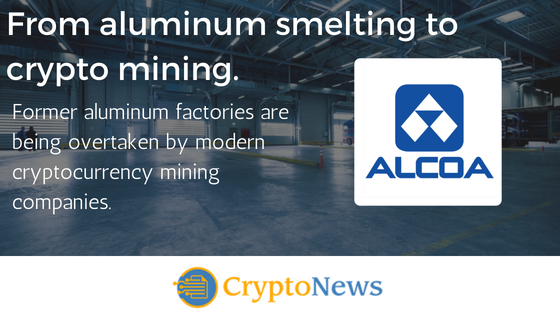 Alcoa, the company that invented aluminum smelting back in 1888 observes once again how one of their old operation sites is being overtaken by a bitcoin / cryptocurrency mining farm operation. Back in June, a company called CoinMint announced that it will invest $700 million in the New York economy in order to take over an old Alcoa plant and build a mining farm.

This time around it is Bitmain, the global cryptocurrency mining leader is the one that is taking the step forward by committing to a $500 million investment. Located in Rockdale, Texas, this mining operation is going to bolster the local, county, and state economy over the course of the next 7 years.

It seems that former Alcoa locations really do make a great selection for establishing mining farms. It is great to see the versatility of companies in leveraging existing structures and breathe new life to somewhat abandoned facilities. Another small reminder that blockchain encourages healthy thinking.

They could have easily decided to go for creating a brand new location, but instead, they decided to deal with red tape and collaborate with the government in this process. We have no information regarding how long this deal took to solidify to this level, but we can’t assume that it’s been an overnight achievement.

According to Bitmain’s press release, the company expects the operations of the new mining facility to begin in the first quarter of 2019. Setup of the location is currently underway with unspecific projections for completion near the end of this year.

What is interesting to note in this story is that even though CoinMint invested more money in the NY aluminum plant, Bitmain is going to create 2.5x more job positions with a smaller investment. Most likely this is due to a difference in state economies, but Bitmain have far more experience, so better use of resources is potentially a significant contributor to the difference.

If you are reading this from Rockdale, Texas you might be excited to learn that Bitmain has officially started recruiting personnel for this location, specifically a project manager and data center site manager. Other jobs might pop up on their official jobs platform, so feel free to look around for more opportunities.

Jeff Stearns, an executive vice-president, and operations director for Bitmain in the USA said that he is truly honored to work with the local government and community, and appreciates the support towards realizing the vision of this mining facility.