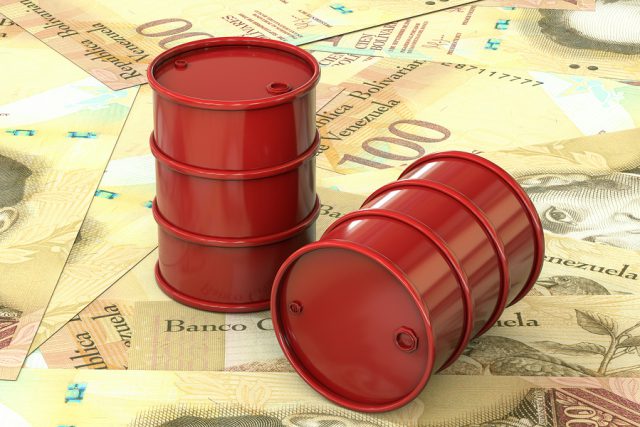 The government of Venezuela has turned to the world of cryptocurrencies in order to try and revive its ailing economy and escape both crippling debts and U.S. sanctions. The resource-rich nation has turned into a something of a digital asset pioneer by issuing a cryptocurrency officially backed by the state.

Despite being a country blessed with an abundance of natural resources, Venezuela has been struggling economically for a significant period of time and the situation has only been getting worse.

The Bolivar has struggled in recent years in comparison to the U.S. dollar, which is the principle currency used for world trade, and also heavily utilized for trading within the petroleum industry.  Between 2015 and 2017, the Dollar gained approximately 10,768% against the Bolivar.

However, according to its oil ministry, Venezuela’s 5 billion barrels of oil reserves can support $267 billion worth of financial instruments and President Nicolas Maduro announced plans for the Petro national cryptocurrency at the end of last year. The digital currency is planned to be backed by Venezuela’s oil and gas reserves and has also resulted in the creation of a new ministry called the Unique Registry of Digital Mining. The ministry is recruiting individuals to help mine the Petro and according to Maduro as many as 860,800 people have signed up to the program.

“I want to announce that Venezuela is going to implement a new cryptocurrency system based on oil reserves, in order to advance in the area of monetary sovereignty. This will allow us to move towards new forms of international financing for the economic and social development of the country.”

The official Petro website elaborated further, stating “Petro has been created in an innovative way, using the highest standards in blockchain technology and information security, electronic asset representations facilitate more direct trade between emerging nations as well as the work of the State within the framework of true financial and economic independence.”

After launching the Petro last week, the Venezuelan government has announced that the pre-sale of the oil-backed cryptocurrency, attracted $735 million worth of investment on the first day.

The private pre-sale of the Petro, was scheduled for February 20 and it dually attracted a number of big industry players with a total of 82.4 million Petro tokens being offered. To go along with the sale, the government also issued a buyer’s manual and stated that buyers can use “hard currencies and cryptocurrencies, but not bolivars.”

Vice president, Tareck El Aissami, also confirmed that “the Petro cryptocurrency tokens can be purchased by Venezuelan nationals as well as other foreign nationals.”

The restrictions on using Venezuelan Bolivars to purchase the Petro makes the currency unavailable to most Venezuelans and the country’s top brass hope to attract investment from countries like Qatar and Turkey, and Russia. Potential purchasers of the state backed crypto asset are being directed to an Ethereum address given by Superintendent, Carlos Vargas and buyers can use EtherDelta in order to place private orders for the Petro.

The value of the entire Petro issuance of 100 million tokens works out to be just over $6 billion, and each token will be valued at and backed by a barrel of Venezuelan crude oil according to information given by President Maduro.

At the launch of the Petro, the head of Venezuela exclaimed “Today, a cryptocurrency is being born that can take on Superman” in reference to his country’s ongoing struggles with the United States of America.

The current administration hopes that the Petro will allow the country to evade restrictions as sanctions levied by The U.S. and European Union currently deter investors and financial institutions in their jurisdictions from acquiring newly issued Venezuelan debt. This basically cuts the nation off from attracting funds from abroad in order to assimilate any new hard currency or to refinance any existing debts.

The Petro can help the government to circumvent the world’s finance ecosystem by allowing trade payments to be processed via an alternative form of currency.

However, the announcement has been met with a mixture of disbelief and distrust in the country, with opposition parties within the country doubting the legitimacy of the scheme.

Interestingly, the country’s hyperinflation had already driven Venezuelans to mining Bitcoin in order to afford basic necessities. With power being heavily subsidized in the region, mining has become a more efficient practice than trying to obtain and use the local currency. As a result, the country’s inhabitants were already seriously incorporating digital currencies into their everyday lives.

The more optimistic observers hope that cryptocurrencies will help stimulate the country’s flailing economy which has crumpled under the weight of economic sanctions, inflation, and volatile oil prices.

The government is already poised to unleash a second cryptocurrency after successfully launching the Petro. Venezuelan media outlet El Nacional has released details of a second state backed currency, ‘Petro Oro’ which will be backed by gold. The article quotes President Nicolas Maduro, who announced just a week ago:

“I’m going to launch next week the Petro Oro, backed by gold, even more powerful, that comes to strengthen the Petro as a Venezuelan currency in the world of cryptocurrencies.”