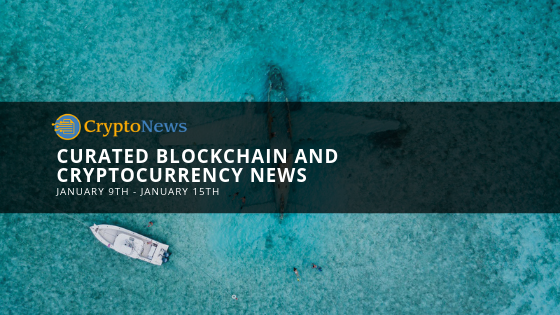 Tobacco stores in France start to sell crypto, Bitwise tries one more time for ETF approval, BitTorrent Token will not be decentralized, suggests ex-CEO, Bitmain stops operations in Texas, Canada is considering their stance on cryptocurrency donations for political campaigns, major Spanish energy company implements a blockchain solution to track renewable energy usage, and the Marshall Islands with their Sovereign dream which may become reality if they are persistent enough.

Bitcoin has lost some of its perceived value in this week going from above $4000 to $3700 at the time of writing. There is no overall negative Bitcoin news to correlate this price movement to, so we have to assume that speculation is at play. Some cryptocurrency investors have big hands in BTC, and any exchange of their assets into another can influence the markets. The sharp movements in the charts are indications of solo or group market play, most likely a whale liquidating BTC assets to fiat or reinvesting into another cryptocurrency.

Outside of these sharp drops, which we assume are sell-offs the market seems relatively stable. Volatility is usually observed when there is a lot of movement on the markets and exchanges, and the lack of volatility in this period suggests that there is a low interest in BTC at the moment.

Tobacco stores in France have suffered lower sales of cigarettes over the past few years. To counteract the reduced profits, shop owners have started to sell different products alongside tobacco. The latest one to be included is a Bitcoin voucher, which can be redeemed via an online wallet provided. French fintech group Keplerk has engaged in an interesting arrangement with six tobacco shops in Paris. Through the use of a partnership with local cash-register software company, tobacco owners now have the ability to sell KeplerK Bitcoin vouchers. Buyers can redeem their Bitcoin on the official website.

KeplerK hopes to bridge the gap between people, and enable them to purchase Bitcoin from people they know and trust, instead of buying from a relatively unreliable online provider. They feel their contribution will lead to a better understanding of cryptocurrency and in fact will provide people with safe digital wallets, making it easy for them to get involved with the wider crypto community.

Bitwise, well known in the investment circles because they were the first ones to create a cryptocurrency index fund, are now trying once again to get the approval necessary for the creation and operation of a Bitcoin exchange-traded fund, or ETF. Their last attempts have resulted in either failure or were placed on indefinite hold, something that the SEC likes to do when they are unable to make a decision.

This time around they are opting for a physically-backed proposal, meaning that their prices will be generated by indexes or futures that actually store Bitcoin, as opposed to the cash-settled pricing methodology presented in the past applications. Next on the list is the VanEck proposal, which is due for a final decision on February 27th. It is too early to speak, but ETFs are important to many and a lot of investors believe they will undoubtedly improve Bitcoin’s price performance.

ETF stocks will be available to trade on a stock exchange, in this case the NYSE Arca, which is a market that focuses on stocks and options. Regardless, should this decision go through, it will be a day that will recover the price of Bitcoin. The entry to a multi-trillion dollar market is inevitable for Bitcoin, as soon as regulators find a way to accept the decentralized asset.

Tron recently announced their BTT token, which promises to reward seeders for uploading and charges leechers to improve their downloading priority. However, not all is how it seems. Former executive Simon Morris who spent more than 10 years working at the company explains that he’s seen both sides of the story, and he does not see a way that the TRON blockchain can handle the amount of transactions necessary to tokenize BitTorrent’s activities.

He further adds that TRON is nothing more than a marketing machine merely connected to being a technology company. The way he explains it makes TRON sound more like a media company than a software development firm. Morris is worried that TRON will use some centralized solution to facilitate all of the necessary operations, and then push it to the market as TRON-based, regardless of the fact that nothing “TRON” will be included. In fact, the entire TRON blockchain is found to be a copy of an Ethereum version.

BitTorrent however, has a lot to gain from being tokenized. The way the software works is by giving priority to connections with the fastest download speed, so they can share the files faster, but that is hard to measure, explains Simon. Tokenizing the network would help identify the fastest connections as they would have the most tokens in their wallets, and those that actually end up buying the tokens for a better connection will provide some monetary support to the development team.

In the Breaker Magazine article, TRON also has responded, claiming that Simon is a disgruntled former employee, and that actions and execution will prove louder than his words. What remains now is to observe and see how the project will develop, and whether TRON will indeed be able to create something note-worthy, or bury the dream together with the shovel.

When cryptomarkets get crushed, investors are the ones that feel the most pain. It can be said that Bitmain is one of the major investors in the technology, as they were producing and selling cryptocurrency miners in exchange for Bitcoin. Bitmain had plans to transform a former Alcoa plant in a Bitcoin mining center, the largest one in the country. We wrote about it when the announcement was made. Rockdale, Texas officials shared that Bitmain has stopped with the operations at the site, a move that can only be correlated with a relatively weakened financial state.

Bitmain insists that they are simply adjusting to the market conditions which is a very polished and reasonable statement. The Alcoa plant in Texas will remain ready to restart, with a small-team still being employed to safeguard whatever equipment can be found at the plant. In the not so distant past, Bitmain also closed down their offices in Israel, with some of the employees being relocated, but most simply fired from their positions.

Selling the tools of the trade may have been a great idea at the time of the “gold rush”, but things have calmed down since then, and the Jo’s of the world are no longer hyped up about crypto. It is unclear whether Bitmain has kept a clear head in the management of their assets, but what is clear is that they did generate tremendous amounts of revenue and profits from their operations. They’ve been sustaining the Bitcoin and cryptocurrency ecosystem with their equipment since 2013.

Canada is facing an interesting crypto challenge. How should it regulate crypto donations for electoral campaigns. Several counties have a few different stances on the matter. The main challenge is that Bitcoin and other crypto assets are behaving like money and like property at the same time. From the law’s perspective, these are two different things, yet both are applicable at the same time.

Another sensitive topic is the factor of anonymity and lack of approval. Canada’s laws prohibit politicians from accepting more than $20 from anonymous senders. With crypto, once your receive address has been shared, nobody really needs any permission to send you money. Some suggestions have been passed around, but no conclusive answer has been given. Canada’s elections are a few months away, but political parties are required to come up with a statement on the topic by January 21st, for purposes of informing the commission that is making the decisions.

What is interesting is that Canada is acknowledging that cryptocurrency has become a relevant topic, and political parties are the instigators of the discussion. That means that individuals that are supporting the parties and are politically active have been asking these questions. Politicians are interested in accepting the donations in whatever way they may come, as they are the fuel for their campaigns. Political campaigns can be incredibly expensive, unless you are tweeting all of the time.

Canada’s decision will set a precedent for cryptocurrency donations for elections and may influence future decisions. For now, the official stance can be read over at elections.ca.

How is the electricity we use created? Do you care about the planet’s health? If so, wouldn’t you want to know that the electricity you use comes from renewable sources? That’s exactly what Iberdrola has created, a blockchain solution that communicates the source of power to the consumers, as reported by the company.

Their pilot and test implementation has proven to be a reliable and effective system through which clean energy is routed and tracked to directly to consumer. The very fact that a smart contract is at work, means that there are no additional cost for ensuring the power generated is renewable.

The pilot took place to connect two wind farms and a hydroelectric power plant with two banks that are hoping to reduce their carbon footprint. The technology used was provided by the Energy Web Foundation, a decentralized blockchain platform specifically designed for regulatory, operational, and market needs of the energy sector.

An interesting application of the platform could potentially enable emergency switches to be activated in catastrophic events, which will ensure that hospitals and other important buildings are prioritized in the distribution of electricity.

The “Sovereign” dream of Marshall Islands

The Marshall Islands are hard at work in their dream to create the world’s first digital legal tender. Despite receiving various economic threats from the U.S. for the direction in which they are going, the leaders of Marshall Islands are not too keen on giving up on their dream. They’ve recently attracted Steve Tendon, a prominent blockchain strategist and advisor which was integral to the successful regulatory updates that happened in Malta.

Now, he is helping the Marshall Islands finalize their work and create the SOV, otherwise known as the Sovereign and bring it to life. Tendon explains that such a move would not be possible in Malta, due to regulatory constraints of being a part of the E.U. This however is not the case with the islands which are free to do as they please with their legal tenders.

The idea behind the SOV is to couple it with an extensive KYC process, which is found at the core of the blockchain platform. This will ensure that banks and regulators will be able to trust the information that is found on the blockchain. At the same time they have found a way to create a layer of privacy for making transactions. “Privacy, not secrecy” is the slogan that goes with the island’s SOV campaign.